LVMH and Tiffany in talks to cut price of $16.6bn deal 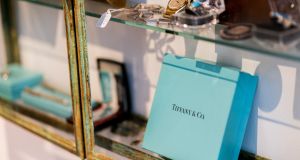 LVMH and Tiffany are in active talks to renegotiate their $16.6 billion combination in an effort to avoid a court battle. Photograph: Jeenah Moon/Bloomberg

LVMH and Tiffany are in active talks to renegotiate their $16.6 billion combination in an effort to avoid a court battle in January, said four people with direct knowledge of the matter.

The French luxury goods group had agreed to pay $135 a share in cash for US jeweller Tiffany in November last year but, since the Covid-19 pandemic hit, it has been pushing for a price cut.

Last month it threatened to walk away from the deal, triggering competing lawsuits in the US commercial court in Delaware.

Tiffany recently signalled that it was willing to consider a new price as long as it was above $130 a share and the French company agreed to close the transaction without further changes, two people said.

LVMH was open to discussing such terms, and the two sides were still in negotiations, said two additional people.

Every $1 per share off the original $135 a share deal equates to a saving of about $120 million on the purchase price.

Shares in Tiffany rose 1.5 per cent to $124.71 in early New York trading on Tuesday. CNBC earlier reported that the discussions were under way.