London Briefing: Fickle fashion business can put in the boot 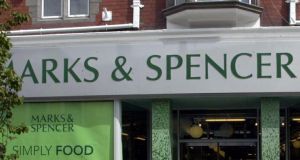 Marks & Spencer: while other retailers may struggle, shoppers have been clamouring for a 1970s-inspired beige suede skirt from its Limited Edition range. Photograph: Cyril Byrne

In the fickle business of fashion it’s all about calling the right trends. But even getting the ranges right doesn’t always guarantee a boost to the bottom line.

Stock market newcomer Shoe Zone saw its value slashed by almost a third at one stage yesterday as it issued a profits warning, and told shareholders that dividends would be “adjusted accordingly” .

Yet at around £14.99 a pair, compared with between £19.99 and £25.99 a pair for the long-leg boots, margins on ankle boost are lower, which reduced average selling prices despite higher volumes.

Shares in the group, which has a chain of around 550 shops in the UK and Ireland, tumbled to 185p. This is well off their peak of 270p but still above the 160p at which the business went public last May. The founding family, led by brothers Michael and Christopher Smith, did well in last year’s float, which triggered a £36 million payday for them. But, with the family retaining a 55 per cent stake in the business, they’ll not only feel the drop in the share price but the cut in dividends too.

Some recent trends in the fashion industry have proved more lucrative for other retailers, notably Marks & Spencer and Burberry. The luxury fashion group last week hailed the once-humble poncho as one of the key drivers of sales over the first half of its financial year.

Monogrammed with the wearer’s initials, Burberry ponchos retail at £895 a throw, and have found favour with celebrities such as Victoria Beckham and Sarah Jessica Parker. Burberry’s chief financial officer Carol Fairweather described growth as “phenomenal” .

At M&S, meanwhile, shoppers have been clamouring for this spring’s “must-have” item – a 1970s-inspired beige suede skirt from its Limited Edition range retailing at £199.

Such has been the demand it’s been billed as “the skirt that saved M&S”. That remains to be seen, but it has given a much-needed boost to the group’s fashion credentials.

Think of a number and double it. That pretty much describes the City’s approach to forecasting today’s results announcement from Tesco, with forecasts ranging from losses of £3 billion to more than £5 billion.

What is certain is that these will be the worst results from Tesco since Jack Cohen started selling clothes from a market stall in London’s East End almost 100 years ago.

Retail analyst Clive Black of Shaw Capital expects “a horror show” from Britain’s biggest retailer, which is struggling with falling sales, a costly and wide-ranging store-closure programme and the after effects of an accounting scandal that is still being investigated by the serious fraud office.

The results will include a huge write-down in the value of the group’s property, built up over years of over-ambitious expansion. It is in the process of closing 43 stores and has abandoned the building of another 49 that were in the pipeline. And there will be grim news too on the group’s pension fund, which is expected to show a funding gap of up to £55 billion.

New chief executive Dave Lewis has been in the Tesco hot-seat for seven months now, and despite the horror story he will have to tell is expected to get a sympathetic hearing from the City, which will be keen to hear more detail of his recovery plan.

Analysts have been impressed with Lewis’s early moves, particularly on pricing, where he is making a sustained effort to fight back at the discounters Aldi and Lidl, which have been eating up the group’s market share.

Excluding the hefty one-off items, Tesco will still be in the black, but group trading profits are forecast to have collapsed from £3.3 billion to around £1.4 billion.

One key question today is whether Tesco has enough firepower to fund its recovery. Lewis has been reluctant to call on shareholders for cash, but may be forced to ask them to stump up if the group is to return to its former glory.

1 Election 2020: Parties' pledges on housing simply don’t add up
2 Britain after Brexit will not be alone, but it will be lonelier
3 First-time buyers drive growth in mortgage values and volumes
4 Banks withdrawing from ATMs – another failure of regulation
5 Coronavirus shuts down Starbucks, Toyota and BA
6 Marlet snaps up 1.8 acre Sandyford site for €17m
7 Housebuilder Glenveagh to build 2,650 more homes than planned
8 Ryanair accepts four-year labour agreement with Irish pilots
9 Tullow shares rally as African oil veteran’s stake nears 10%
10 Getting out from under ‘never-ending’ Celtic Tiger debt burden
Real news has value SUBSCRIBE