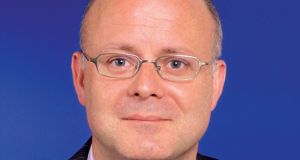 Accountants KPMG have re-elected Shaun Murphy as managing partner in Ireland following a period of strong growth that saw revenue at the firm hit €300 million.

The move by the partners of KPMG in Ireland means that Mr Murphy will serve a second three-year term at the head of the firm here. Earlier in 2015, he was elected as lead director of its global board.

During his first two years of office as managing partner in Ireland, reported revenue for the Irish business grew by 26 per cent to €300 million.

At the same time, employment there grew more than 10 per cent to 2,200 people across its audit, tax, deal advisory and consultancy services.

Mr Murphy said he was delighted with his re-election. “I’m very proud of the way our teams deliver for clients and I look forward to leading the firm for another three years,” he said.

He joined KPMG in 1991 and was elected a partner eight years later.

Mr Murphy has held a number of management positions at the firm, including head of tax and legal services, before being elected managing partner in 2012.

He also a director of the KPMG Europe, Middle East and Africa board and of the firm’s data and analytics investment fund.

KPMG operates in 155 countries. The company recently announced that its global fee income had reached $24.44 billion in 2014.