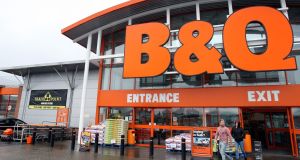 Home improvement retailer Kingfisher reported a 23.1 per cent rise in first half profit, driven by a strong sales recovery in its second quarter as consumers took to do-it-yourself (DIY) and gardening projects during the Covid-19 pandemic.

The group, which owns B&Q and Screwfix in Ireland and Britain, and Castorama and Brico Depot in France and other markets, said on Tuesday second quarter to July 31 like-for-like sales had increased 19.5 per cent.

“This recovery has continued into Q3 to date, with growth across all banners and categories,” said chief executive Thierry Garnier.

“The crisis has prompted more people to rediscover their homes and find pleasure in making them better. It is creating new home improvement needs, as people seek new ways to use space or adjust to working from home,” he said.

Kingfisher made an adjusted pretax profit of £415 million (€451.3 million) in its first half - ahead of analysts’ expectations and up from £337 million in the same period last year. Total sales fell 1.3 per cent to £5.92 billion, reflecting the impact of the virus in the first quarter when stores were closed.

E-commerce sales soared 164 per cent and now represent 19 per cent of total sales versus 7 per cent in the same period last year.

“Looking forward, while the near term outlook is uncertain, the longer term opportunity for Kingfisher is significant,” added Mr Garnier.

Shares in Kingfisher, up 22 per cent so far this year, closed Monday at 265 pence, valuing the business at £5.63 billion. – Reuters

1 Hurrah for the companies giving staff more time off
2 RTÉ to seek 70 voluntary redundancies as ‘large costs’ beckon in 2021
3 Covid-19 will worsen shortage of accountants, says CPA Ireland
4 ‘We lost money on our planned wedding in Spain. Covid saw to that’
5 Some Irish money market funds came close to danger in March
6 Policy failed us during the banking crisis and it’s failing us again
7 How long can Government afford to keep State pension age at 66?
8 Sustainable investment: How your pension can help tackle climate change
9 Aryzta to pursue asset sales as takeover talks fail
10 Samsung patriarch Lee Kun-hee dies at 78
Real news has value SUBSCRIBE