Kerry cheesed off at Dunnes Stores over trademark row 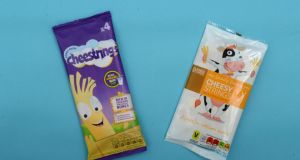 Two of Ireland’s biggest private sector companies are shaping up for a court battle . . . over cheese, if you please.

Cheestrings, a linchpin of Kerry’s sprawling chilled foods division, is wildly popular in Ireland and the UK, where it is by far the market leader. It’s basically a skinny lump of cheese, heated and twisted into a small edible rope for kids.

It is personified in television ads by Mr Strings, who looks a bit like a yellow pencil with a Bart Simpson haircut. Your children will know him if you don’t. Kerry has registered certain trademarks surrounding its brand.

Dunnes, which is currently discounting like a boss in the war of attrition gripping the grocery trade in the run-up to Christmas, has also started selling an own-brand Cheesy Strings product. It is made in Slovakia, where strings of cheese are all the rage. They call it korbaciky. A mouthful, in more ways than one.

Kerry has issued High Court injunction proceedings against Dunnes over the row. Word on the legal grapevine is that it could emerge in court next week.

Dunnes is a veteran of trademark disputes. Its dust-up with Karen Millen over fashion designs was a fascinating battle that went all the way to Europe. Margaret Heffernan, Ireland’s most formidable businesswoman, rarely shies from a battle. Eirespan, a distributor for Dunnes, is also subject to court proceedings.

Dunnes is one of Kerry’s biggest customers in Ireland, so it’s a bit of a highwire act to take it on in court.

The lawyers are sure to have work until the cows come home whatever happens.