Irish profits up at Gucci, down at Ralph Lauren 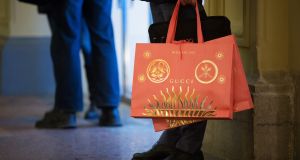 Gucci’s only Irish outlet is at Brown Thomas in Dublin. Photograph: Bloomberg

Pretax profits at the Irish arm of luxury brand, Gucci last year increased by 3 per cent to €749,184 in spite of revenues tumbling.

Revenues at Gucci Ireland Ltd decreased by 35 per cent from €6.19 million to €4 million in the 12 months to the end of February last.

The revenues decreased sharply following the closure of the Gucci store at Kildare Village in January 2017.

The brand’s remaining outlet in Ireland is in Brown Thomas on Dublin’s Grafton Street where the brand’s range of Soho bags was popular over the busy Christmas period.

The small leather “disco bag” sells for €890. Eager customers were also put on a waiting list for Gucci belts over Christmas.

A sizeable chunk of customers spending at the Gucci outlet at Brown Thomas are overseas visitors, with the directors of the Irish arm noting that “a significant portion of our sales performance is linked to the level of tourism in Ireland”.

The directors of Gucci Ireland stated: “We continue to work towards increasing our market share by focusing on the achievement of an organic growth on the existing concession network, providing an excellent retail experience to our customers and optimising the merchandise available for sale.”

The closure of the Kildare Village outlet contributed to numbers employed at Gucci Ireland falling from 18 to 10, with staff costs declining from €577,099 to €331,094.

The company had a gross margin last year of 58 per cent.

Separate accounts for the main Irish arm for another high-end brand, Ralph Lauren, show that pretax profits tumbled last year by 58 per cent to €90,178.

Ralph Lauren Ireland Ltd’s pretax profits decreased sharply after the company’s revenues dipped from €3.3 million to €3.22 million in the 12 months to the end of March last.

The firm operates a factory outlet at Kildare Village along with being the Irish commissionaire (agent) of Swiss-based unit, Ralph Lauren Europe Sari.

In notes accompanying the accounts, directors of the company said the drop in turnover came despite the opening of a new childrenswear outlet in Kildare and the refurbishment of its adult clothing store there. They noted that the decrease is due to a decline from 34 per cent to 28 per cent in commission rates earned from Ralph Lauren Europe Sari, with operating expenses remaining stable at €3.133 million.

Staff costs last year increased from €1.1 million to €1.23 million with the numbers employed declining from 80 to 79.