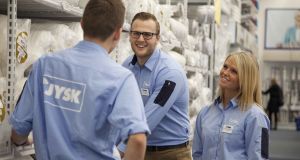 Danish home retail group Jysk plans to open 15 stores across Ireland over the next two years, creating more than 200 jobs in the process.

The company, which sells everything from mattresses to indoor and outdoor furniture, will open its first Irish store in April in Naas, Co Kildare. A further two stores will open in Drogheda, Co Louth, and Navan, Co Meath, in May.

Jysk sells sofas from £175 and a dining table with four chairs from £100 in Britain where it has 16 stores in northern England and the midlands.

The privately owned Jysk is looking to fill deputy store manager and sales assistant positions for its first four stores, including a Portlaoise outlet which will open this summer.

Jysk’s strong entry into the Irish market appears to be a show of confidence in bricks and mortar retail at a time when its competitors have shied away from expanding their physical offerings.

Swedish rival Ikea recently eschewed expansion of its store network after a strong performance online. The company’s Ireland manager said its online division was now central to its growth plans.

Nevertheless, Jysk’s Ireland head of retail said the market was a “very important” one, given the “prominent position the retail industry holds in the country”.

“As a company, we focus on entering a new market each year, and we are excited that 2019 is the year we bring our brand to Ireland,” said Roni Tuominen.

In addition to its physical store openings, Jysk’s head office in Dublin will open early this year where it will fill 10 roles in sales, marketing, human resources and finance. The retailer’s online service will be available from April 15th.

Mr Tuominen, who will build the Irish arm of the business, has spent nearly two decades in the retail sector in Finland, both at Jysk and retail group Clas Ohlson.

Founded in 1979 by Danish billionaire Lars Larsen, the company last year recorded turnover in excess of €3.5 billion. Mr Larsen is ranked as the world’s 514th richest person by Forbes, with a net worth of $2.8 billion (€2.46 billion).

Jysk has more than 2,700 stores and 23,000 employees across 51 countries. In Germany and Austria the group operates under the Dänisches Bettenlager name.

1 Brown Thomas and Arnotts to cut 150 jobs due to coronavirus crisis
2 47,000 homes need to be built each year to solve housing crisis, report says
3 Jervis shopping centre takes major tenants to court over rent disputes
4 Can Covid free your workplace of bureaucracy?
5 Hairdressing 7% more expensive in July as prices declined across economy
6 Dogpatch Labs and SOSV shortlisted to win NDRC contract
7 Seán FitzPatrick makes fresh bid to secure planning for new Greystones home
8 Digital pollution: ‘We have a pandemic of data and 90% of it is crap’
9 How Argentina and its creditors thrashed out a $65bn deal
10 Shed Distillery in Leitrim to open €3m visitor centre next month
Real news has value SUBSCRIBE