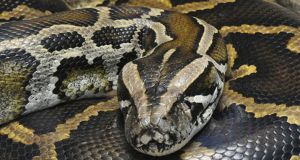 Legal imports have grown from 350,000 skins valued at just €100 million (€72 million) in 2005 as Beyoncé, Johnny Depp’s partner, Amber Heard, Khloé Kardashian and Tamara Ecclestone have jumped on the trend for the exotic handbags, which can sell for more than €5,000 each.

Illegally traded python skins worth $1 billion (€720 million) are being imported into Europe every year as weak regulation fails to stop illicit traders capitalising on demand for the dramatically patterned leather.

Half a million skins are imported legally each year from south-east Asia, most of them destined for Italy, Germany and France, where they are made into designer handbags, shoes and belts.

Legal imports have grown from 350,000 skins valued at just €100 million (€72 million) in 2005 as Beyoncé, Johnny Depp’s partner, Amber Heard, Khloé Kardashian and Tamara Ecclestone have jumped on the trend for the exotic handbags, which can sell for more than €5,000 each.

But the black market in skins is thought to be worth about the same amount again, amid widespread circumventing of international agreements to limit the number of pythons taken from the wild. In its first report on how to improve the international trade and protect pythons, the Python Conservation Partnership, backed by the owner of Gucci - Kering - and the International Union for Conservation of Nature, said python farms could be part of the answer.

“This report offers [AN]alternative solution to the sourcing of python skins for which demand is escalating. However, there is still some way to go towards more transparent, better-managed python farming,” said Jean-Christophe Vié, deputy director of the International Union for Conservation of Nature’s global species programme. “We must make sure that attention is not diverted from the urgent need to preserve wild pythons and their habitats through direct site conservation and action against illegal trade.”

In the past, farming of south-east Asia’s reticulated python (Python reticulatus) and Burmese python (Python molurus bivittatus) - two of the world’s largest snakes - had been dismissed as uneconomic because pythons were thought to take too long to mature and to be too difficult to feed and breed in captivity.

The report said commercial farms do exist in China, Vietnam and Thailand. It recommends this industry could be improved with the introduction of better monitoring, more humane slaughter techniques and the urgent development of technology such as DNA or isotope testing to help identify whether a skin is farmed or taken from the wild. Such tests could help prevent the “laundering” of illegally caught wild pythons through farms. That practice is thought to be so widespread that the report says that all supposedly farmed python skin from Laos, Cambodia, Indonesia and Malaysia should be treated with caution as there is little proof that farms exist in these countries.

Marie-Claire Daveu, chief sustainability officer at Kering, said that demand for python skin accessories was rising at Gucci, especially from Asia, and so it was keen to ensure a sustainable source of supply. “Our objective is to be sure that we don’t put in danger these two species of python and their eco-system,” she said.

The company currently buys farmed and wild-caught skins certified under the Convention on International Trade in Endangered Species (CITES) scheme from Malaysia, Indonesia and Vietnam.

Daveu said that there needed to be a balance between ethically farmed pythons and the trade in wild python skins, which provided jobs for local communities that could support the protection of the reptiles in their own habitat. But she admitted: “Today there is no way to be fully sure where the skin has come from.”