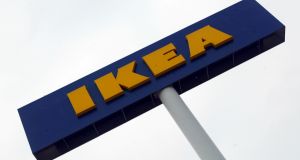 Ikea has committed to paying the living wage to its Irish staff. Photograph: Getty Images

Sales jumped 17 per cent to almost €132 million in the 12 months to the end of August 2015, delivering pretax profit of €13.2 million, up from €7.2 million in 2014. Coming on top of a 8 per cent rise in sales and a 22 per cent jump in profit in 2014, the latest figures point to accelerating growth for the company which has just one retail outlet in Ireland, in Ballymun in Dublin.

The company’s tax bill jumped by over a third to €1.55 million

In its results, Ikea Ireland confirms a that it has committed to joining the Living Wage Foundation during the current financial year. Employees will receive the living wage from April.

Staff numbers rose only marginally in 2015 and wages actually fell slightly over the 12-month period.

The company said two of its directors received remuneration of €341,055.

It also noted that the final purchase price for the Carrickeeny wind farm business was almost €150,000 less than previously advised at €3.23 million.

Ikea is increasing its provision for return of products annually as it grows its business. The company says its provision is based on a historical pattern of returns. It pencilled in a figure of €197,186 for 2015, up from €135,207 the previous year. The value of stock carried at the end of the period also rose – to €5.32 million from €4.4 million in August 2014.