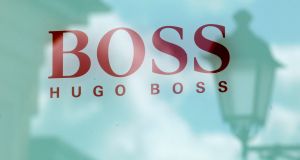 Quarterly net profit at Hugo Boss fell 84 per cent to €11 million on sales down 4 per cent to €622 million. The net profit missed average analyst forecasts for €36 million, while sales were ahead of a consensus for €611 million. Photograph: Grigory Dukor/Reuters

Mark Langer, the new chief executive of Hugo Boss, said the German fashion house is closing another 20 stores and refocusing its US business as it cut its full-year outlook following a slump in second-quarter profits.

Quarterly net profit fell 84 per cent to €11 million on sales down 4 per cent to €622 million. The net profit missed average analyst forecasts for €36 million, while sales were ahead of a consensus for €611 million.

Langer, finance chief since 2010, took over as chief executive in May, replacing Claus-Dietrich Lahrs, who stepped down in February after a steep fall in sales in the United States and China. Under Lahrs, the German brand known for its sharp men’s suits went more upmarket, opened hundreds of stores around the world and put a bigger focus on womenswear. Langer has already said he wants Boss to put the focus back on menswear.

“To return to profitable growth again in the medium term, we have made decisions that are painful to begin with,” Langer said in a statement on Friday. “The market environment will remain difficult for the foreseeable future.”

The luxury goods industry is going through its most severe slowdown in seven years and several groups and brands have seen their profitability hit by the downturn, including Burberry, Cartier owner Richemont and Swatch, which issued a profit warning last month.

Boss, which announced in March it would close around 20 of its 145 stores in greater China, said it would shut around 20 less profitable stores globally in the next 18 months and focus in the United States on selling the brand in high-quality outlets to try to minimise discounting.

Hugo Boss now expects full-year currency adjusted sales to fall between zero and 3 per cent, compared with a previous outlook for a rise, while it expects earnings before interest, taxation, depreciation and amortisation (EBITDA) before special items to fall 17 to 23 per cent. – Reuters