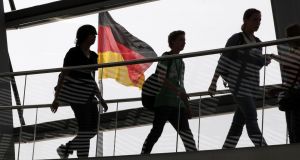 Growth in Germany’s private sector accelerated in November, a survey showed on Monday, suggesting Europe’s biggest economy is defying worries over a slowdown in China and the emissions scandal at car maker Volkswagen. Photo: Bloomberg

Growth in Germany’s private sector accelerated in November, a survey showed on Monday, suggesting Europe’s biggest economy is defying worries over a slowdown in China and the emissions scandal at car maker Volkswagen.

Markit’s flash composite Purchasing Managers’ Index (PMI), which tracks manufacturing and services activity and accounts for more than two-thirds of the economy, rose to 54.9 from 54.2 in October - far above the 50 mark that separates growth from contraction for the 31st month running.

Chris Williamson, chief economist at Markit, said the German economy was running on a “business as usual” basis with no discernable effects from the VW crisis.

The subindex for the manufacturing sector showed growth hit a three-month high. Output decreased for the third month in a row, but backlogs of work piled up.

New export orders and employment rose to their highest readings in three months, suggesting demand from abroad remained strong despite broad concerns about the global economy.

The PMI survey also showed a significant increase in activity in the services sector in November, with new business rising to its highest reading in nearly four years.

Moreover, the services sector showed its most optimistic assessment of recruitment in almost two years, supported by an increase in business expectations compared with last month’s reading.

“I think given the amount of stimulus in the economy that’s aimed at the domestic market, it’s not surprising that you’re seeing good service sector growth,” Mr Williamson said.