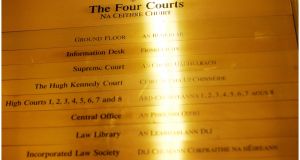 The case has been before the courts on several occasions since the company was wound up. Photograph: Bryan O’Brien

The chief operations officer of a now-liquidated firm that provided cash in transit and other security services has been ordered to return €62,000 to the company.

Insolvency practitioner Joe Walsh of JW Accountants was appointed as the company’s liquidator.

Mr Walsh, represented by Stephen Brady BL, claims, following his investigations into the company’s affairs, there is a deficit of about €1.8 million in the firm’s client account.

Senaca, with a registered address at Tougher Business Park, Newhall, Naas, Co Kildare, had originally acknowledged a deficit of €1 million in the company’s client account.

The Revenue Commissioners are owed more than €670,000 by the company.

Clients of the company who claim they are also owed money include the Irish Society for Prevention of Cruelty to Children and Horse Racing Ireland.

Previously the court was told Mr Farrell had admitted in a sworn statement that clients’ monies had been used to shore up the company and he apologised for that.

The court also heard, following a complaint to the Garda, there is a criminal investigation into the company’s affairs.

The case has been before the courts on several occasions since the company was wound up.

On Friday, Mr Justice O’Connor was told Mr Walsh had discovered that, in the weeks before the company went into liquidation, monies totalling almost €62,000 were paid out of the company to Mr Farrell.

On discovering the payments, Mr Walsh sought an explanation from Mr Farrell, who said the monies came from third parties and were used as loans to the company following a difficult period in 2017, counsel said.

Mr Farrell, who denies any impropriety in regard to those payments, said the money was used to repay the loans to the third parties.

Counsel said Mr Walsh was not satisfied with the explanation advanced by Mr Farrell and could not find documentary evidence to fully support Mr Farrell’s claims.

It is Mr Walsh’s case that the money belongs to the company, and he wanted an order under the 2014 Companies Act that it be repaid, counsel said.

In his ruling, Mr Justice O’Connor said he was satisfied payment of the €62,000 amounted to “an unfair preference” to a purported creditor of the company and was therefore invalid.

The judge directed the €62,000 be repaid to the company “forthwith”.

The judge said he was not making a finding Mr Farrell is a creditor of the company as that was a matter for the liquidator.

Mr Farrell was not in court but the judge was satisfied he had been served with all the relevant documents and was aware of the liquidator’s application.

As well as providing a cash-in-transit service, Senaca also supplied security personnel to Shell during the controversial construction of a gas pipeline and refinery at Bellanaboy in Co Mayo some years ago.