Sales up 2.1 per cent, below market forecasts of a 2.5 per cent rise, new figures show 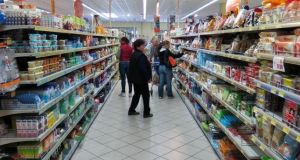 Among the largest euro zone economies, Germany posted a 1.1 per cent monthly drop of retail sales and France recorded a decrease of 0.7 per cent

Retail sales, a proxy for household spending, decreased 0.5 percent in March month-on-month in the 19-country currency union, Eurostat said. Economists polled by Reuters had forecast a much smaller decrease of 0.1 per cent.

Yearly figures were also lower than expected, with sales up 2.1 per cent, below market forecasts of a 2.5 per cent rise.

The fall in March sales was partly offset by an upward revision of data for February. Eurostat said on Wednesday that in February sales rose 0.3 per cent on a monthly basis and 2.7 per cent year-on-year. It had previously estimated an increase of 0.2 per cent monthly and 2.4 per cent yearly.

On a monthly basis, retail sales of food, drinks and tobacco products dropped 1.3 per cent in March, the biggest fall among all the categories.

Sales of non-food products, excluding automotive fuels, went down 0.5 per cent month-on-month. Purchases of fuel for cars also dropped 0.4 per cent on a monthly basis.

Among the largest euro zone economies, Germany posted a 1.1 per cent monthly drop of retail sales and France recorded a decrease of 0.7 per cent. In Spain, sales increased 0.4 per cent on a monthly basis in March.