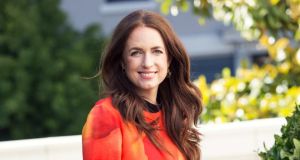 Ramona Nicholas: co-founder and joint MD of Cara Pharmacy: “While the media stuff was great in terms of the brand, I felt it took me away from work.” Photograph: Richie Stokes

Having stepped out of the limelight to have her second child early last year, Ramona Nicholas admits she’s somewhat wary of stepping back into it.

It isn’t so much that fame is a drag but more that she worries that time spent away from her business might be a distraction.

The entrepreneur who co-founded the Cara Pharmacy chain with her husband Canice Nicholas in 2002, has become well known in recent years thanks to her appearances on The Secret Millionaire and Dragons’ Den. But after returning to work recently following maternity leave she is all biz.

“Don’t get me wrong, I really enjoyed doing the media thing and all the talks and everything that came with it, but after taking time out to do two seasons of Dragons’ Den and to have Sarah I was anxious to get back to the business,” she says.

“It felt like after doing the show that things were a little remiss even though it didn’t show in our figures. While the media stuff was great in terms of the brand, I felt it took me away from work so I really wanted to get back and reclaim my place in the company on my return,” adds Nicholas.

While she is widely seen as the public face of the Cara Pharmacy chain – although she stresses this wasn’t always the case – Nicholas says she is currently focused more on growth, than glamour.

As if to prove the point, it is worth noting that this interview is taking place on a bus, albeit one that is hurtling its way back from Palo Alto to San Francisco, and which also happens to be choc-a-bloc full of Irish entrepreneurs. Nicholas and her fellow travellers are all either finalists or alumni of the EY Entrepreneur of the Year awards programme and are in the United States to take part in a CEO Retreat.

Since getting back to work, the Co Tyrone-born businesswoman has been leading the group’s efforts to beef up its senior team with a new finance director and head of sales and operations among the latest recruits. She has also been trying to rethink reporting lines so that managers take more responsibility of the company’s stores.

“We’re looking at big structural changes, getting store managers to do more of the day-to-day stuff and ultimately only having a few people reporting into us rather than everyone. The plan is to free Canice and I up so that we’re not constantly firefighting,” Nicholas says.

With ambitious plans to grow the company over the coming years, it seems as though the internal restructuring is not before time.

“The aim is to allow us to move forward and expand the business, to open up new pharmacies, acquire more Cara Home stores, grow the online side of things and develop other areas as well,” says Nicholas.

Cara is a retail chain with 13 pharmacies and two Cara Home lifestyle stores in the northwest. Its online business, meanwhile, accounts for about €1 million in annual revenues.

The company, which currently employs 184 people, reported a turnover of €25.3 million last year. However, it is now looking to double revenues to €50 million with growth coming in part from expansion to Dublin.

Cara is aiming to open “between six and seven” stores in the capital in the near term but is also eyeing possible expansion to other cities in Ireland, and further afield.

“We feel our business model isn’t represented in Dublin at present, but we’re getting a lot of transactions through our ecommerce site from the east coast and any time we’ve had any masterclasses in the capital they always outperform ones held elsewhere,” says Nicholas.

“Our model also doesn’t exist in the UK, but that’s a longer-term project. We always joke about being on Fifth Avenue as well at some point and have high conversion rates online from the US. But we’ll have to wait and see on that,” she adds.

So what exactly is Cara’s modus operandi and what makes it different from other pharmacy chains?

“Our business model is basically to acquire underperforming pharmacies and turn them around,” says Nicholas.

That’s it in a nutshell, but there’s more to the story than that. The company has become well known for being part-pharmacy services and part-retail with Canice Nicholas looking after the former and his wife the latter.

The decision to divvy up the business in such a manner was one born in part out of necessity as the group sought to differentiate itself from competitors. However, it also helped save the company when trouble came a-calling in the late 1990s.

Ever the canny entrepreneur, Nicholas used the €40,000 proceeds from selling a house she had acquired at the ripe age of 21 to help the couple purchase Cara’s first fully-fledged pharmacy in Bundoran in 2002. This came after the qualified pharmacist debated whether to go into business on her own and possibly against her then boyfriend and future husband who already had a store open in Co Donegal.

Within a year they had seven pharmacies after buying the Manor Group courtesy of a €13 million bank loan. The chain consolidated the business for a time before acquiring two stores in Co Sligo in 2006.

All was going swimmingly until 2009, when the company experienced something of an “annus horribilis”.

Not only did Cara bear the full brunt of the economic downturn, but it was also hit by the Health Service Executive’s decision to cut pharmacy fees by up to 34 per cent, a move that led the group to shut its doors temporarily.

It wasn’t all bad. After all, 2009 was also the year that the couple’s first child Alex was born. But on the business front, things were grim.

“The HSE’s decision was going to cost us €1 million a year in revenues at a time when the Pharmaceutical Society of Ireland was introducing a lot of new regulations such as insisting on us having consultation areas. This was all happening as the recession meant pharmacists across the country were either letting staff go or closing down altogether,” says Nicholas.

When the company found itself facing dwindling revenues, it doubled down on the retail side of things and reduced its margins on over-the-counter medicines.

“We were hated by other pharmacists because it is a very tight-knit community and we were seen to be going against the rest of them. We also pissed off the department stores and supermarkets as well though because we were getting very aggressive deals.

Cara had always been retail-focused but it began to bring in initiatives not typically seen in the pharmacy sector, such as loyalty schemes, sales and special events. It was also the first to introduce brands such as Benefit Cosmetics, which were previously only available in department stores.

“We didn’t want to be just another pharmacy. We wanted to have a social aspect to the business so that it would be an experience for those coming into our stores,”says Nicholas.

“We had felt bad about having closed our doors during the strike. It wasn’t something that sat right with us and so we decided we wouldn’t follow everyone else. We are determined to be leaders in the health and beauty space and see our competition as anyone in that environment, including the likes of Tesco, ” she says.

The recession might have slowed down the company’s growth plans but it has continued to expand in recent years, opening its first Cara Home stores and moving across the Border into Northern Ireland.The focus is firmly on Dublin now and Nicholas is sure Cara can achieve its expansion aims by itself. However, she is unsure what happens after this.

Consolidation is the name of the game for many pharmacy chains currently as is evident in Carlyle Cardinal Ireland’s recent €50 million takeover of Sam McCauley Chemists. Nicholas believes Cara may also have to consider taking in outside investment.

“The next step is all about funding. We have to decide whether we are going to give away some of the company to allow us to expand and be one of the industry leaders. I think that within five years there will only be four major players in this marketplace. Hopefully we’ll be one of those together with Boots Alliance, Lloyds and one other independent pharmacist,” adds Nicholas.

Despite being someone who has regularly been in the spotlight, Nicholas isn’t nearly as reserved as most business leaders. She’s direct and not afraid to open up about her personal life.

In the past, she has openly discussed fertility difficulties, how tough it is being a female entrepreneur, and the stress involved in running a business with your partner.

She also admits that after her first child she raced back to work too quickly. “I took no maternity leave with Alex, but took my full 26 weeks with Sarah and had no regrets about doing it. When I was younger I felt I had a point to prove but I’m more relaxed about things now,” she says.

Nicholas says she and Canice work well together as a team, partly because they naturally took up different, but complementary roles in the business. A strict rule regarding talking shop at home also means that family time remains sacrosanct.

Having overcome plenty of obstacles in the past, Nicholas believes she is now capable of coping with anything, even Brexit.

“I lived in the North for the first 20 years of my life and to imagine proper borders going up again would be extremely disappointing. But obstacles will always be there and are to be overcome,” she said.

Family: Married to Canice with two children – Alex (8) and Sarah (1)

Something you might expect: Ramona likes to pay unannounced visits to her stores.

Something you might not expect: She has reflexology at least once a week. “I’m really bad at taking time out of work and while I’m not into any of that holistic stuff I find that when I have reflexology I just zone out.”

1 A Smigin of language goes a long way for well-travelled Cork woman
2 Huawei asks Samsung and SK Hynix for chip supplies in face of US isolation
3 Pricewatch: Coronavirus has given us four categories of shopper
4 Reopening economy does not cause coronavirus spike – researchers
5 Lucy Kellaway: We will miss the office if it dies
6 Our warped sense of perspective bodes ill for Ireland's economy
7 Economies can be restarted if bold and imaginative choices are made
8 Chicken farmer sues Revenue over failed family business
9 Hong Kong tensions unnerve world stocks
10 Charting the stock markets: does technical analysis work?
Real news has value SUBSCRIBE