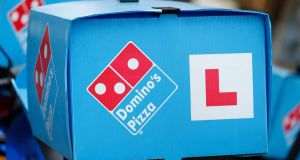 Karshan, trading as Domino’s Pizza, had said its contract with the drivers recognises the freedom the drivers have to work when they choose. Photograph: PA Wire

A company operating in the Domino’s Pizza franchise has lost a High Court appeal over a finding that its delivery drivers must be treated as PAYE workers rather than self-employed.

In proceedings against the Revenue Commissioners, Karshan (Midlands) Ltd, trading as Domino’s Pizza, had challenged an Appeal Commissioner’s finding that drivers working in 2010/11 under contracts “of” services were taxable workers paying PAYE and national insurance.

Karshan claimed the drivers operated under contracts “for” services, were therefore self-employed, and responsible for their own tax deductions.

Karshan had said its contract with the drivers recognises the freedom the drivers have to work when they choose.

It argued the commissioner was wrong to rely on an English case which found a driver’s right to cancel shifts at short notice did not relieve the driver of work-related obligations.

The commissioner failed to follow Irish law in relation to “ongoing reciprocal commitment” between employer and employee to perform work, it said.

Revenue argued, among other things, the contract required the driver to initiate an agreement in relation to availability for work. It said a roster was drawn up by a store manager based on availability sheets and the commissioner found, once a driver was rostered for one or more shifts, there was a contract “containing mutual obligations”.

Mr Justice O’Connor was not persuaded the mutuality of obligations always required Karshan to provide work on an “ongoing basis” in the way the company had contended.

The commissioner, in relying on English law on mutual obligations, did not go against Irish law but “rather recognised the necessity to adapt to modern means of engaging workers”, he said.

Karshan had not shown that the commissioner misapplied the law in Ireland concerning the concept of mutual obligations, he found.

He could not criticise the commissioner’s findings that a driver who wanted to work put their name on the availability sheet and that, once rostered, there was a contract which contained mutual obligations.

The right to cancel a shift at short notice imposed an obligation on the driver to find a substitute driver and to work out the remainder of rostered shifts, he said.

This scenario was different to that of a self-employed tradesperson, he noted.

A plumber may agree to service boiler but has “an inherently tremendous latitude” in that task unlike drivers who have ongoing shift obligations, he said.

The commissioner had regard in his decision to the integration of drivers into the pizza company’s business, including a requirement they wear uniforms and place logos on their cars, he said.

The commissioner was correct in law, he concluded.