Central Bank and NTMA among most poorly funded pension schemes 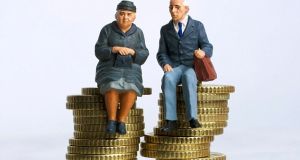 Six years on from the financial crash and almost €10 billion later, Ireland’s pension schemes are still effectively in just as much of a mess as they were back in 2010.

That’s the finding of a report by consultants Lane Clark & Peacock, who have been examining the pension exposure of Ireland’s largest companies for the past nine years.

In 2010, as companies battled with the fallout from the crash, the average funding level was 86 per cent. Last year, despite myriad measures introduced by the regulator to improve pension funding and stock markets that have nearly trebled from 2009 lows, at least as measured by the MSCI World Index, the average deficit was 85 per cent.

The figures relate to defined-benefit, or final salary, pension schemes which promise a monthly payment for life in retirement, determined generally by your final salary and the number of years you have been a member of the scheme. It’s easy to see why these schemes have been axed by many private sector companies in recent years.

The LCP report noted the situation would be even worse but for corrective measures taken by many schemes – measures which inevitably mean lower benefits for scheme members.

Just three of the 26 schemes examined are fully funded, though that is an improvement on last year when only Kingspan could boast pension assets in excess of liabilities.

It’s possibly not surprising that the three most poorly funded scheme are at State agencies. Perhaps less predictably, the worst offender is none other than the regulator of Ireland’s financial services sector, the Central Bank, where pension assets cover just two-thirds of liabilities.

The bank also secured another unwanted gong – being the single worst performer among the businesses studied in 2016. The funding ratio on its pension liabilities tumbled from 81 per cent in 2015 to 66 per cent last year – a calamitous slide of 19 per cent.

And keeping it company on the leaderboard for underperformers is none other than the National Treasury Management Agency (NTMA), which manages the State’s borrowing requirements. Troubling times.