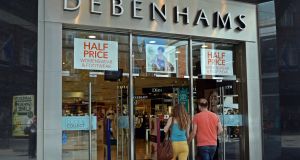 The High Court has approved a restructuring for the company operating Debenhams eleven Irish stores to continue trading, saving up 1,330 jobs.

The plan will enable Debenhams Retail (Ireland) Limited, a subsidiary of the UK Debenhams, exit examinership.

The company put its Irish business into examinership in May.

It sought court protection in the wake of losses sustained since the recession in 2007 and after withdrawal of support of its UK parent.

As part of its survival plan, the subsidiary successfully secured new leases at several key stores.

It had been in a rental row with the Roche family, who in 2006 sold Roches Stores to Debenhams while remaining landlord on the retailer’s biggest Irish outlets.

Debenhams Retail (Ireland) Limited welcomed the court’s approval, saying it worked hard to secure the future of the business by maintaining high standards during the uncertain examinership period.

“The directors of Debenhams Retail (Ireland) Ltd are delighted to have secured the future of Debenhams stores in Ireland. We are very pleased with the overall outcome of securing jobs and keeping open all eleven stores, thereby ensuring that we continue to offer our customers a great selection of products and brands,” director John Bebbington said.

“ Our priorities are now to implement the restructuring plan to ensure Debenhams’ long term sustainable future in Ireland. To that end, an investment plan for the business has commenced in addition to a funding facility that will provide support to the business for the next three years,” he said.