Cantillon: DIGI report misses half the picture on alcohol 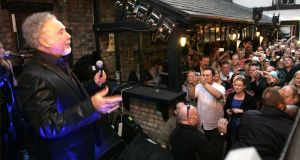 Depending on your point of view, the, ahem, Arthur’s Day celebration (attracting the likes of Tom Jones, above) is either a music festival hosted by pubs or an organised p***-up, cynically marketed by global drinks giant Diageo to sell more pints of Guinness.

It has certainly stirred debate in the lead-up to this Thursday’s events and was hardly the ideal backdrop for the launch yesterday of a report by the industry calling for a task force to be established to “prevent the demise of Irish pubs and independent off-licences”, written by Dublin City University economist Anthony Foley, the Drinks Industry Group of Ireland’s (DIGI) favourite gun for hire.

This was Foley’s fifth report for the group this year alone.There’s a familiar narrative – pubs are great but they’ve been hammered by the recession and regulation, and need a break from the Government to survive. Join the queue lads.

The report states that the total volume of the alcohol market declined by 9.9 per cent between 2007 and 2012. During that time, the number of pubs fell by 959 and employment fell by 17 per cent. Bar sales dropped by 33 per cent. There’s the usual lines about how the drinks industry contributes more than €2 billion in VAT and excise duty a year and generates about €1 billion annually in exports. But there’s no mention of the substantial cost to the State of cleaning up the mess created by alcohol abuse.

Diageo’s Peter O’Brien, who doubles as chairman of DIGI, said the Government’s decision last year to increase excise on alcohol had “added substantial hardship to an industry that was already under considerable pressure”.

This ignores certain realities. Ireland always had too many pubs – there are still 7,500 of them across the State. The economic crash just accelerated the inevitable shake-out in the sector.

The industry group members might be better off addressing the shortcomings in their facilities and their prices rather than looking to the Government for a dig out. You also have to wonder why, if the Irish pub industry is such a basket case, are so many British chains – JD Wetherspoon, Greene King and Mitchells & Butlers – eyeing acquisitions here?