Returned goods to be quarantined, make-up to be ‘virtually’ tested, restaurants and toilets will be closed initially 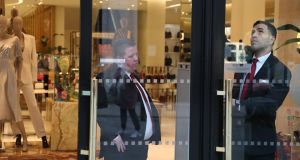 Steaming of garments after handling by customers, technology to allow customers to virtually “try on” make-up, and the quarantining of purchases returned by customers are among safety measures planned by Dublin department stores Brown Thomas and Arnotts for their reopening next month.

Donald McDonald, managing director of both stores, owned by UK group Selfridges, said customers will also be able to book entry to the stores via an app. Walk-in shoppers will also be facilitated, via a queuing system if necessary.

Capacity will be reduced to between 33 and 40 per cent to facilitate social distancing, with a maximum of 450 customers allowed in BT on Dublin’s Grafton Street at once, and a cap of 1,100 on the larger Arnotts outlet. The number of customers will be electronically counted on entry and exit, and displayed on screens for customers to see.

Mr McDonald confirmed that both stores’ fitting rooms will be open but tightly controlled, with garments sanitised and quarantined after handling. There will be no staff contact with customers at make-up counters and no self-service tester brushes. Mr McDonald said instead, both stores will have digital screens to allow customers “virtually” assess how make-up appears on their skin.

Restaurants and toilets will be closed initially. When food outlets reopen, tables will be removed and any that were partially self-service where customers collected hot food will instead change so staff bring food to tables. Most food outlets at BT and Arnotts are already table service.

The measures, which may be adapted to meet guidelines from public health authorities, were derived from the Selfridges group’s experience of reopening its Holt Renfrew outlet in Canada and De Bijenkorf in the Netherlands.

Mr McDonald said there would not be a one-way system in the stores, but there would be prominent signage and wayfinding to direct customers: “We will remove a lot of fixtures to create a feeling of more space.”

There will also be a free same-day home delivery service for customers who buy some larger items, to avoid them bringing them on to public transport and potentially into contact with the wider public.

“We want to reduce interactions but we also want to focus on the customer experience and do it better than everyone else,” he said.

The measures will apply to the two large department stores either side of the river Liffey, as well as stores outside the capital in Cork, Galway and Limerick. All are currently slated for June 29th reopening under the Government’s plan for “large stores”. Smaller retail outlets will be allowed open on June 8th.

“But I feel we should open larger and smaller retail outlets together. It would be safer as it would avoid congregation in smaller outlets if they open first,” said Mr McDonald.

He said the company had been in close contact with State officials and would follow whatever rules were set, but the group would be ready for an earlier reopening if allowed.