Argento founder Peter Boyle is streets ahead of the past 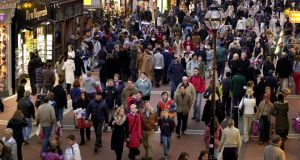 There cannot be many former street traders who can look out of the head office of their £24 million a year business on to the exact same street where they once stood selling their wares in all kind of weathers.

But Peter Boyle can, which may explain why his flagship store and head office on Belfast’s Royal Avenue will probably always be the jewel in the crown of his business.

Strabane-born Boyle is founder and chief executive of Argento, whose chain of stores stretches from Belfast’s main shopping district to Grafton Street in Dublin.

Argento, which specialises in contemporary jewellery, is also one of the fastest growing online jewellery retailers in the UK and Ireland. It is the single largest retailer for Pandora, the jewellery manufacturer publicly listed on the Nasdaq Copenhagen stock exchange.

While studying business at the University of Ulster, Boyle fell in to selling posters in a market stall. He had a good eye for choosing merchandise and his entire stock sold out in his first week of trading.

Then a friend made him a gift of a Celtic mirror; he liked the look of it and persuaded her to design a few more which he added to his poster trade.

The trader next to where Boyle had pitched up to sell his wares asked him to keep an eye on his jewellery stall.

He noticed jewellery turned a bigger profit more quickly than his posters and mirrors ever could. It was also “much easier to carry around”, according to Boyle and in that moment a business was born.

As it grew, Boyle always looked for “the better product that was more high quality” It may have been more expensive but it proved to be a winner with customers. He soon found himself travelling around Ireland selling jewellery at festivals, gigs and beaches.

He had a regular weekly spot in Belfast too – albeit as an illegal trader – selling from a prime spot in the main shopping district of Royal Avenue.

During his student days his trade was interrupted because the police moved illegal traders. “We used to pitch up and know we had until lunchtime before the RUC would come and move us on, but then we always came back again after they changed the shift,” Boyle says.

“One day an inspector turned up and as we were packing up and told us he didn’t have the power to move us as it was a civil matter – that was a lightbulb moment for me; after that we kept trading in Belfast and just paid the fines.”

After graduating he stuck with his street-trading, sourcing jewellery from all over the world and building up his business contacts until Belfast City Council started to get tough with illegal traders and the fines started going up.

Boyle was also in trouble at home over the fines.

“My wife is a barrister and she told me just open a shop and avoid the fines. So after the last fine for £1,100 I decided to call it a day and I opened the first shop based on this very cool shop I had seen in London – it was all glass, very modern and I just reproduced the look.”

He uses this look in his 50 shops in the UK and Ireland which employ more than 500 people and had a turnover of more than £24 million in 2014.

According to Boyle, who is one of this year’s guest speakers, there is one accessory that anyone who wants to make it in business needs above any other: a love of hard work.

“Hard work pays off: if you want to be successful, then you need to be prepared to make sacrifices, be ready to do whatever it takes and work hard. Never say it can’t be done.”