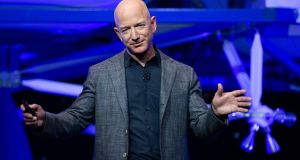 Jeff Bezos was already the world’s richest man before lockdown sales at Amazon boosted his coffers. Photograph: AFP via Getty

Amazon emerged as one of the big winners of the coronavirus pandemic on Thursday, announcing it had revenues of $75.4 billion (€69 billion) in the first three months of the year – over $33 million an hour.

Jeff Bezos, Amazon’s founder, said the company’s shareholders should “take a seat” because the company planned to spend $4 billion or more in the next three months on coronavirus-related expenses, including getting products to customers and keeping employees safe.

The $4 billion spend will be equal to Amazon’s entire profit for the next quarter, and its shares sank on the news.

The company also benefited from a $10.3 billion boost from Amazon Web Services, its web hosting service, which counts Netflix among its clients as well as the World Health Organisation.

Amazon, meanwhile, has been hiring at a furious pace to keep up with demand from customers stuck at home thanks to quarantine orders across the US. In the past two months it has announced plans to take on another 175,000 employees.

The boom in sales has further added to Mr Bezos’s enormous wealth. Already the world’s richest man, Bezos has seen his fortune swell by $13 billion this month to $145 billion, as Amazon’s share price hit new highs. He is the biggest winner among a number of billionaires who have added $308 billion to their wealth amid the crisis. – Guardian service