Key question is now the level at which checks will apply, industry expert says 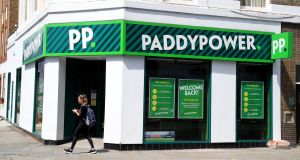 The £100-a-month affordability check could hit Irish gambling giant Flutter, owner of Paddy Power, Betfair and Skybet, which operate in the British market.

Strict new affordability checks for gamblers will become the reality in Britain in a move likely to hit Paddy Power owner Flutter Entertainment, among others, one industry figure believes.

British betting regulator the Gambling Commission is proposing that gaming companies carry out mandatory affordability checks on customers who lose £100 (€113.96) or more a month, to limit harm, sparking heated debate with the industry.

Matt Zarb-Cousin, co-founder of Gamban, which has developed digital aids for problem gamblers, believes the debate on the issue is over. The question is now simply the level at which checks will apply.

“Operators are supposed to do them anyway, but they only do them where someone has lost tens of thousands,” he explained. “If you look at data on disposable income, £100 is probably about right.”

Mr Zarb-Cousin dismissed the argument that checks involved an invasion of betting company customers’ privacy as “operators already hold lots of data” on their punters.

A deadline on responses to the proposal passed last Tuesday. Betting companies and other groups argue that it is unrealistic and will damage their businesses.

The limit would not apply in Northern Ireland, where gambling regulation is devolved to the local executive.

British racing, partly funded through a levy on betting, believes the checks could cost the sport £60 million a year.

The British Horseracing Authority, along with groups representing trainers and owners, warned last week that this damage could be inflicted at a time when their industry was trying to recover from a £250 million loss from Covid-19 restrictions.

He said this should involve applying appropriate spending limits at registration for customers with financial red flags, monitoring clients through safer gaming controls and applying a spending backstop on the “rare occasions” where the other two steps have missed something.

Gamban has developed an app that prevents problem gamblers from accessing betting sites. It is available free via treatment providers in Britain and Norway, while the company works with Irish charity Extern. Individuals can also download the app themselves and pay €2.50 per month to use it.

According to Mr Zarb-Cousin, 5 per cent of British customers account for 60 per cent of digital betting profits.

He argues that online slot machines and casino games are a key cause of problem betting.

Operators cross-sell these to customers who bet on racing and other sports. Mr Zarb-Cousin suggests that affordability checks could be less stringent if companies offered sports betting and casino games on separate sites, or required customers to use different “digital wallets” for each.