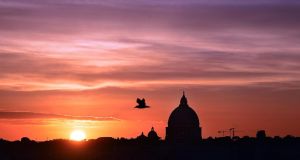 Assets that would never be sold and thus have no market value -- including St Peter’s Basilica (pictured), the Sistine Chapel and priceless art treasures by Michelangelo -- will be included in financial statements though the Vatican is still considering whether and how they should be valued. (Photograph: CLAUDIO ONORATI/EPA)

Pope Francis, galvanised by a scandal over Vatican finances, has ordered the most powerful bodies in the city-state to launch an unprecedented audit of its wealth and crack down on runaway spending.

At the suggestion of his economic chief, Cardinal George Pell, Francis has set up a “Working-Party for the Economic Future” which brings together the Secretariat of State, or prime minister’s office, the Vatican Bank and other agencies. Francis has told the panel “to address the financial challenges and identify how more resources can be devoted to the many good works of the Church, especially supporting the poor and vulnerable,” Danny Casey, director of Pell’s office at the Secretariat for the Economy, said in an interview.

The pope’s initiatives come as five people stand trial in the Vatican over the leak of confidential documents in two books published last month that described corruption, mismanagement and wasteful spending by church officials. Those on trial deny wrongdoing. Francis, 78, has pushed for more openness and transparency in Vatican financial and economic agencies but he has faced resistance from the Rome bureaucracy.

On the flight back to Rome on Monday after a visit to Africa, Francis told reporters that the so-called Vatileaks II scandal was an indication of the mess that he’s trying to sort out. The trial of two former Vatican employees alongside the books’ authors highlighted Church efforts “to seek out corruption, the things which aren’t right,” he said, according to a transcript provided by the Vatican. The working group, which held its first meeting last week, will study measures to cut costs and raise revenue as part of a long-term financial plan. “This will include comparing actual expenditure against budgets at a consolidated level, which is a new initiative,” Casey said.

As officials try to drag the Vatican’s financial management into the 21st century officials will appoint one of the world’s top-four accounting firms to review the Church’s processes, Casey said. The audit will look at financial investments, real estate and cultural assets. The four biggest firms are PricewaterhouseCoopers, Deloitte and Touche, EY and KPMG.

Assets that would never be sold and thus have no market value -- including St Peter’s Basilica, the Sistine Chapel and priceless art treasures by Michelangelo -- will be included in financial statements though the Vatican is still considering whether and how they should be valued.

While Casey declined to speculate on overall asset values, Pell, his boss, said earlier this year that the Vatican’s total assets were worth more than $3 billion. Separately, the Institute for the Works of Religion, better-known as the Vatican Bank, has €6 billion in deposits, and assets under management and custody for clients.