Your money in 2021: Four things to watch out for

From your pay packet to the property outlook, here’s what’s coming down the road 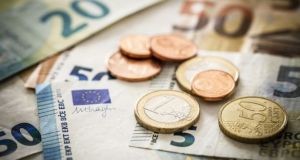 While we may all be hoping that we will get to use those airline and holiday vouchers we have accumulated since the pandemic hit soon, we may first be in for some uncertain months.

So before we get to start spending again somewhere else, here are four things to watch out for over the coming year.

With only a very slight change in personal taxes announced in October’s budget – a slight increase in the ceiling of the 4.5 per cent rate of the universal social charge from €20,484 to €20,687 – workers across the State won’t be expecting any change of note in their pay cheques this month.

But despite the lack of movement, it isn’t really accurate to say that individuals’ tax positions haven’t changed. If your income increased during 2020, then your effective rate of tax will also increase, as the bands haven’t moved in line with inflation.

This means that, while Minister for Finance Paschal Donohoe didn’t actually levy a tax increase on your income, your tax burden will increase nonetheless. It’s a sneaky way of growing a country’s tax take while telling most people they are no worse off.

While so-called “bracket creep” is one way the Government will boost tax revenues, a more obvious way will become known in mid-January when the Revenue issues its preliminary end of year statements for 2020. For those PAYE workers whose employers availed of the Temporary Wage Subsidy Scheme, or those who availed of the Pandemic Unemployment Payment (PUP) during the year, this is likely to contain an unfortunate surprise – a tax bill.

This is because the scheme was paid on a gross basis (ie with no tax deducted at source by your employer as it would usually be and therefore is liable to income tax and USC), leaving unsuspecting employees with potentially significant tax bills.

You may find that your employer will be willing to foot the bill. Revenue has confirmed recently that employers can submit the amount owed to their employees without these employees incurring a benefit in kind liability. In normal circumstances, such a payment would attract a tax liability which would reduce its attractiveness, but Revenue appears to be recognising the special circumstances of the pandemic in this respect.

Watch out too for a revamped Save and Spend incentive. The scheme, which was introduced back in September, allows someone to claim back up to €125 on the costs of eating out or staying in a hotel or guesthouse. It is due to run out in April, but given the trajectory of the pandemic, and the restrictions on eating out etc, figures published last week unsurprisingly showed that far fewer people have availed of it than had been expected when it was launched.

If there’s one certainty of the past few months, it’s that more and more of us have turned to our phone or laptop to transact our shopping – and we’re doing it more often than ever before.

However, big changes are on the horizon in the form of Brexit. Amazon, Asos, Boohoo. so many of the shops we buy from are based in the UK. The big change will be how retailers deal with VAT, as import VAT may be payable on some orders from the UK.

Some retailers, such as Next, have gotten around any potential issues by creating an Irish company, while others, such as Asos, say you will be able to avoid any new customs duties or import taxes as it will ship to Ireland from its EU-based warehouse.

Others are looking to incorporate any additional charges into the overall price at the point of purchase. Online department store Littlewoods for example, has issued a briefing to its customers, telling them that, post January 1st, they shouldn’t worry about facing extra duty or VAT on their delivery, while they will also continue to offer free delivery.

“The price on our website will be the final cost to you,” it says. However, what it does not indicate is whether or not we should expect these prices to rise, in order to cover additional duty charges.

Amazon has also been in touch with its customers, telling them that they may face “customs duties, taxes and fees” on their purchases in future. In addition, it will no longer accept free returns; in future, “any costs incurred for the return including transport costs, as well as any associated import fees of customs, will be payable by the person returning the goods”.

Another change is that it’s likely we won’t be able to save money on shipping by using a virtual UK address.

One such provider, Parcel Motel, suspended its UK virtual address service from December 28th due to the impact of Brexit. You should still however, be able to use AddressPal, a service from An Post. However, an administration fee of €3.50 will apply to all items, as well as a UK service fee of €6.50. That’s an additional €10 on the price of the item, and additional customs charges may also apply.

A combination of uncertainty over the future, having nowhere to go and little outside the day-to-day to spend money on means Irish savings are now at record levels. Latest figures from the Central Bank show that savings stood at €123 billion at the end of October, indicating average savings of some €33,566 per adult.

And even if we start spending again in 2021, many of us have a supply of vouchers and unused credit to spend first.

The challenge for savers over the year ahead will be, first, to protect your savings by trying to earn some form of return on it and, secondly, to find a home for your money.

With forecasters expecting interest rates to remain at record lows for some time, earning a return is likely to be difficult. Rates on offer on deposits continue to trend to zero.

As of year-end, one of the best offers on the market comes from State Savings, with its five-year product offering a return of 0.98 per cent annual equivalent rate (AER), or 1.5 per cent AER on the 10-year solidarity bond. Remember that you can exit these products at any time, by giving seven days’ notice; you won’t face a penalty for doing so, you’ll just miss out on future interest payments.

The other advantage is that, unlike other institutions, State Savings products are tax free so you will not see DIRT (deposit interest retention tax) at 33 per cent deducted to add insult to injury.

You may need to move on this, however, as the NTMA may move to cut these rates in the coming months.

The other challenge is finding a home for your savings. With banks increasingly facing charges themselves on deposits, these are being passed onto savers in different ways. Credit unions are limiting savings to as little as €10,000, while banks such as AIB and Bank of Ireland no longer reward customers for keeping €2,000-€3,000 in current accounts. This situation is likely to continue – if not worsen – in 2021.

It was one of the more surprising aspects of 2020, and 2021 may yet prove to be no different, with strong demand supporting house prices despite the challenges of the pandemic.

Figures for November show another record month for mortgage approvals as potential house buyers, who may have put off decisions earlier in the year, sought and received approval from lenders. Demand appears particularly strong from first-time buyers.

And if the banks appear willing to grant approval – though in some cases at least those impacted by Covid, either by claiming PUP or working for companies claiming under a wage subsidy scheme, may find it more difficult – lenders may also once more be more open to offering exemptions on the Central Bank’s mortgage lending rules.

These exemptions allow banks to lend more than 3.5 times a person’s income or less than a 20 per cent of a deposit (10 per cent for a first-time buyer) to a certain proportion of their borrowers. Banks tightened up on these exemptions when the pandemic hit back in March. Unfortunately, as they are offered on an annual basis, customers won’t benefit from any exemptions unused from 2020.

This means that potential home-buyers may need to move fast to get one, once they become available again.

“Exceptions run on a calendar year basis so the large majority will be processed at the start of the year, meaning borrowers need to be prepared to hit the ground running by having up-to-date paperwork to back up their applications and avoid any potential delays,” advises Martina Hennessy, managing director of mortgage platform Doddl.ie.

In addition, putative home-buyers will watch the Government’s planned affordable housing scheme keenly. In short, the scheme will allow first-time buyers buy 70 per cent of a house, with the Government taking a 30 per cent equity stake. This will clearly make a house more affordable, particularly if it can be used in conjunction with Help to Buy.

This means more buyers potentially will be chasing a limited number of new properties. So good news for the builders then, but perhaps not for would-be buyers.

Also something to be aware of is that the market for homeloans may shrink further, if Natwest decides to start winding down its Irish operation, Ulster Bank, as it has threatened to do. As Ulster offers some of the more competitive mortgage rates on the market, this will be bad news for home-buyers.