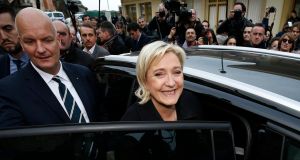 Marine Le Pen has promised to take France out of the euro. Photograph: Epa/Sebastien Nogier

Investors completely miscalculated Brexit and did not see the Trump victory coming. Now, with far-right candidate Marine Le Pen polling well in France, they do not want to be caught out a third time. Little surprise then that the biggest gainers have been the “safe-havens” and particularly German government bonds, some of which traded yesterday at record levels.

Such are the nerves that investors are now paying the German government at an interest rate not far off 0.1 per cent to lend them money for two years. Negative yields – or interest rates – have been around for some time, but the perception of safety in German bonds is pushing it to new levels.

The key fact is that Marine Le Pen has promised to take France out of the euro, and while this actually happening is still seen as a long shot, investors know only too well the surprises which political populism can throw up. Nobody knows how a euro exit would be achieved – and the French far right leader’s policies are short of detail – but even a whiff that the French government might seek to repay their obligations in a new franc, rather than the euro, has investors twitchy.

Ireland has so far escaped the worst of the volatility. Like other “mid-table” European countries, the gap between our bond interest rates and those of Germany have widened, as German rates have fallen. We are not a safe haven, but nor have we been caught up in volatile trading. French bond interest rates have normally traded well below Ireland’s, but now they are roughly the same.

The trouble for investors is that the French political situation is volatile. Some forecasters believe Le Pen may get through the first round of voting on April 23rd, but lose in the run-off on May 7th. But who knows?

The irony is that strong economic figures – and signs of a pick-up in inflation – should have euro-zone bond interest rates edging higher. It does finally appear that the ECB medicine is working. The only problem, of course, is that this brings forward the day when ECB short-term base rates will rise, pushing up bank rates for borrowers, including Irish ones.