Will rent controls start to work in 2018? 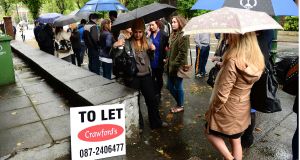 If you’re wondering why the much-vaunted rent controls, first introduced this time last year, are having so little impact on stalling price growth, consider this investor’s tale.

He had a house rented out close to Dublin that was bringing in €1,300 a month – far below the market rates, which were more than €1,800. Stymied by the rent controls, which limit rent increases to 4 per cent a year (and 2 per cent a year for tenancies in place before the end of 2016), when his tenants left he was looking only at marginal increases in his rent.

So what did he do? Sold this property and bought the one next door. Previously owner occupied, it wasn’t subject to rent controls, which meant that he could slap a new, higher rate of €1,900 on it. The difference in rent quickly covered his legal and stamp duty costs.

It might be an extreme example, but it’s just one of the reasons why the rise in rents is showing little sign of slowing down and it shows how the controls are distorting the market. Latest figures from the Residential Tenancies Board (RTB) show that rents continue to rise across the State by about 10 per cent a year, with the “average” rent now a record €1,056.

Tenants will hope very much that they will, but there are several reasons why rent controls aren’t working as had been hoped.

Not all residential property is subject to the rent caps. If you build a new property and subsequently let it, you are, of course, exempt from the rent caps, and can set your rent at whatever you think the market can take. Consider Ires Reit’s new Maple development in Sandyford, south Dublin, where it brought two-beds to the rental market starting at about €2,500 – considerably above even market rates at the time.

Given the dearth of new builds, this is unlikely to have too much of an inflationary impact on the market. But what about previously unrented properties?

And when they do start renting them out, these new owners set rents in excess even of market rates to hedge against the market rising by more than 4 per cent a year, “because they’re trying to factor in the next year or two”.

Another category is properties that have undergone a “substantial change” in the prior two years. Anecdotally, it would seem that this exception has been used as a ruse by landlords to commence new tenancies, with sitting tenants asked to leave while an upgrade is being undertaken – often not more than a quick paint job.

Back in November, however, the RTB tightened these rules. Now landlords need to carry out significant changes to qualify for an exemption, such as an attic or garage conversion, or replacing external windows and doors. Upgrades and cosmetic improvements, such as new carpets or painting and tiling, won’t make the grade.

But it doesn’t mean landlords won’t still try to “exempt” themselves from the new requirements. In Waterford city, for example, a five-bed residential property is listed for sale at €185,000, producing a rental yield of “in excess of 13 per cent” – but the ad also states the potential to increase this if “cosmetic upgrades” are made to the property.

Or how about Dundrum, south Dublin, where 25 luxury penthouses and apartments have been brought to the market with an annual rent roll of €460,032, but where there is an “opportunity to refurbish units and increase letting/sale value”.

Whether these refurbs will meet the new RTB guidelines is not certain – but what is clear is that there is an appetite to sidestep the controls.

Another factor that may be limiting the impact of rent controls is the fact that different rate increases are allowed for different tenancies – and these can, in fact, carry an incentive for landlords to get new tenants. Rent increases on tenancies that started before the rules came in – December 24th, 2016 – are limited to 2 per cent per annum, beginning only after 24 months have elapsed; tenancies signed more recently can be subject to rent increases of up to 4 per cent every year.

So let’s consider an existing tenancy, and a new let, at the Beacon Court development in Sandyford, south Dublin. This two-bed apartment is currently renting at €1,600 a month, and the tenants have been in situ since April 1st, 2014. Now the landlord wants to increase the rent, effective from April 1st, 2018. According to the RTB calculator, the landlord can only apply an increase of 8 per cent (2 per cent a year), which will bring the rent up to €1,728 from next April.

Now consider what would happen if the tenant left, and the landlord could seek a new tenant. Straight away the rent they are entitled to seek rockets to €1,856, an increase of €256 a month, or 16 per cent. While market rents are still likely to be higher – Kennedy Wilson, for example, is marketing a two-bed at nearby Vantage for €2,520 a month – a new tenant may still be more appealing than an existing one for a landlord looking to maximise their yield.

You’re a landlord, and you’re looking to get out of the market. Capital values have risen and you consider it a good time to sell. The only problem is that you’ve had tenants sitting in the property since 2015, paying rents that are now at least a third off market rates. And this could impact how much you can sell your property for.

“An investor will walk away. They won’t buy [because of rent controls]. They buy the neighbour’s house,” says Grennan.

At a recent BidX1 property auction, for example, most of the properties for sale were with vacant possession, with only a few subject to tenancies. A vacant property may be more attractive because the rental cap doesn’t apply if the property was not let in the 24 months before the area became a rent pressure zone.

But here, as elsewhere, there is scope to fudge the numbers. One Dublin agent was recently asked to bump up the rent in documentation for a sale. He didn’t, but it’s likely to be happening elsewhere.

4 Ability to monitor the market

Another mitigating factor is the ability of the Residential Tenancies Board to monitor the market. According to a spokesman for the RTB, it does not have investigatory powers to monitor if landlords are observing the rules in rent pressure zones.

This means, for example, that if a property is let at one rate, and then turns up listed on daft.ie with a rent hike of 15 per cent, the RTB won’t identify this. It is up to the tenant to bring their concerns to a dispute resolution service offered by the RTB.

While the RTB can then award damages for breach of landlord or tenant obligations, of up to €20,000, the current framework puts the ball very much in the landlords’ court.

Given the shortage of properties, many tenants won’t bring a case if their landlord increases the rent by more than 4 per cent; and in the case of new tenancies, a prospective tenant has no way of knowing whether the advertised rate is in line with rent control rules.