Wicklow, Meath and Kildare the most unaffordable counties for first-time buyers 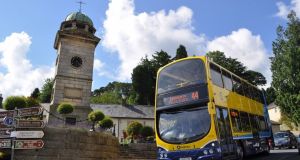 It now takes more than 15 years to save for a deposit for a home in Wicklow and Kildare, while the average first-time buyer would need a multiple of almost five times their annual income – far in excess of that allowed under Central Bank rules – to qualify for a mortgage in these counties.

These are just some of the findings in a new report by EY-DKM Economic Advisory which seeks to quantify just how unaffordable buying a home for the average first-time buyer has become, right across the country.

The report considers the two criteria a first-time buyer must satisfy when buying a home; whether or not they can afford the mortgage repayments on a property based on a mortgage of 3.5 times their household income, and secondly, their ability to accumulate a sufficient deposit of 10 per cent to purchase the property.

In terms of saving for a deposit, the most affordable counties for first-time buyers are Leitrim, where it would take just 1.3 years to save enough for a home; Waterford (1.6 years), Sligo (1.6 years), Cavan (1.7 years) and Longford (1.9 years).

When it comes to meeting the 3.5 times income rule, apart from Dublin and its commuter counties, as well as Cork and Galway, first-time buyers earning an average income everywhere else in the country will find housing affordable based on this metric. In Longford and Leitrim for example, a first-time buyer will need just 2.1 times their annual income to buy a home.

Meanwhile Waterford and Limerick emerge as the two most affordable cities in the survey, requiring two or less years to save enough for a deposit, and income multiples of just 3.1 and 3.3, respectively.

According to Annette Hughes, director with EY-DKM Economic Advisory, such affordability levels means that the Central Bank’s income multiple rule is sufficient.

“We would be absolutely strongly of the view that we should not change the macro prudential rules,” she said, adding, “They’re working”.

There are no surprises when it comes to the counties that are the least affordable for first-time buyers, as they are dominated by the Dublin commuter counties. Wicklow, Meath and Kildare top the results as the most unaffordable when it comes to saving for a deposit, with an average of 15+ years required to save a 10 per cent deposit on the typical home.

Galway is another city where it’s difficult to save for a deposit, with 8.3 years of saving required to get the requisite 10 per cent down-payment.

When looked at from the perspective of meeting the Central Bank rules of a mortgage being no more than 3.5 times a borrower’s income, seven counties are classed as unaffordable.

These are Dublin, Cork, Galway, Meath, Wicklow, Kildare and Louth, and it means that all these counties remain out of reach to the majority of first-time buyers, even if the 10 per cent deposit was achieved. In Dublin and Wicklow for example, a first-time buyer on an average income would need 4.9 times their annual income to buy a home, 4.7 times in Kildare, 4.5 in Meath and 4.2 times in Cork.

And affordability is unlikely to significantly improve until we build more homes.

“The answer is we really need more supply and we need it in the right locations,” said Hughes.

The report also throws up some surprises; in Roscommon for example, you’d need just 2.9 times a typical first-time buyer income to buy a home, given low property prices in the county. The median price for 2018 was €90,000 for example. Saving for a deposit however, is a lot more difficult, given rental rates and income levels. According to the report then, this makes Roscommon one of the most unaffordable places to buy a home, as it would take a first-time buyer more than 10 years to save enough for a deposit.

And, while one might have expected Dublin to top the charts as the most unaffordable place to buy, first-time buyers in Dublin are only required to save for 4.3 years, although it has a steeper income multiple, of 4.9. According to Hughes, Dublin’s better performance relative to the commuter counties is down to income; gross household incomes in Dublin are 15.7 per cent higher than Wicklow.

“One of the key messages from this report is that rents are very high in locations you wouldn’t expect and it’s actually leading to a dysfunctional owner occupant market,” she said, adding, “Rents are so high people aren’t in a position to save for a deposit”.

Moreover, the report finds no evidence that people are moving out of less affordable areas into more affordable counties, as one could have reasonably expected.

1 Who are Ireland’s 17 billionaires?
2 My father in a nursing home wants to gift me his house
3 Nama lends Cosgraves €15m to fund huge apartment development
4 Are there annual limits on inheritances or gifts to a child?
5 Property firm sues engineering company over waterproofing of basement
6 Health insurance: Switch often for your financial wellbeing
7 Cubic Telecom raises more than €11 million in funding
8 Long-hyped smart fridges will never run out of milk or data
9 Stocktake: Skyrocketing Tesla may drive ‘mother of all short squeezes’
10 Builders finish over 21,000 homes in State during 2019
Real news has value SUBSCRIBE
Save money on international transfers