Strategists are quite bullish, favouring US over Europe, but should investors care? 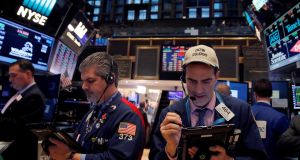 Traders work on the floor at the New York Stock Exchange in Manhattan. Most 2017 forecasts focus on the stock-friendly measures promised by the incoming Trump administration. Photograph: Andrew Kelly/Reuters

Investors have been in bullish mood lately, with Donald Trump’s presidential election victory unleashing markets’ animal spirits. Strategists envisage continued gains in 2017, but should you heed them or dismiss their prognostications as little more than a guessing game?

Most 2017 forecasts focus on the stock-friendly measures promised by the incoming Trump administration, namely lower corporate taxes, fiscal stimulus and reduced regulations. RBC Capital Markets says US indices could enjoy double-digit gains, with tax cuts alone boosting corporate profits by 5 to 7 per cent. Citigroup is even more optimistic on this front, estimating that a cut in the effective corporation tax from 27 to 20 per cent could add $12 (€11.50) to its $129 S&P 500 earnings estimate – a profits boost of almost 10 per cent.

Investors are also bullish about the prospect of increased infrastructural spending. Investors have been calling for increased fiscal stimulus throughout 2016, as revealed by Merrill Lynch’s monthly fund manager surveys. The promise of same has led to a swift about-turn in sentiment; the US was underweighted by fund managers for most of the last 18 months, but allocations are now well above historical norms.

The narrative has changed, with investors abandoning talk of secular stagnation and increasingly dwelling on “something much growthier and more inflationary”, as Fidelity Investments put it recently.

Not one of the major Wall Street investment banks envisages that stocks will fall in 2017.

Not everyone is a raging bull, however. The big market gains of the last eight weeks mean markets are pricing in both tax cuts and big infrastructure spending plans, cautions Merrill Lynch’s Savita Subramanian, who says 2017 “may be the least certain in years”.

Higher-than-usual risks coupled with a “binary set of outcomes that have dramatically contrasting results” mean there could be “euphoria or fizzle”, with the S&P 500 potentially soaring to 2,700 – a gain of some 20 per cent – or falling all the way down to 1,600. Merrill’s base-case scenario is that stocks will ultimately register small single-digit gains in 2017, a prognosis shared by Goldman Sachs. It sees indices enjoying strong gains in the early months of the year but elevated valuations, coupled with the dawning reality of what is politically possible, will ultimately result in very minor gains for the S&P 500. Credit Suisse and Barclays are also wary about US valuations.

Valuations are less of an issue in Europe, although political uncertainty surrounding the growing appeal of anti-EU populism is capping optimism – the consensus forecast is that the Euro Stoxx 600 index will gain about 5 per cent in 2017. This muted sentiment is reflected in Merrill’s most recent monthly fund manager survey, with managers underweighting Europe relative to history.

The muted sentiment means there is potential for above-average gains should Europe’s corporate and political landscape prove less challenging than feared. This mild contrarian appeal is noted by UBS, which points out that the gap between inflows into US and European exchange-traded funds hit an “eye-catching” $145 billion after Trump’s election victory, compared to a gap of just $10 billion in 2015. Furthermore, UBS argues the global reflationary trade should boost Europe, with 40 per cent of Europe’s dividend yield coming from financials and energy stocks, “the areas best placed to benefit from a return to inflation”.

They were just as wrong about 2015; “Wall Street’s top strategists are uniformly upbeat about the outlook for stocks in the year ahead”, reported Barron’s at the time, with the S&P 500 projected to gain 10 per cent. Instead, stocks were flat in 2015.

These are not isolated examples. Annual forecasts are rarely on the mark, and for good reason. Firstly, it’s almost impossible to consistently make accurate, time-specific predictions. Predictions of muted S&P 500 gains were looking good until the second week of November, only for stocks to then take off as markets began to price in Trumponomics. Furthermore, can one honestly blame strategists for failing to predict 2016’s political shocks (Brexit and Trump)? Is it reasonable to expect them to foresee the trajectory of, for example, oil prices, which fell from above $60 in mid-2015 to a low of $27 in January 2016 before then doubling in price?

Forecasters should not be criticised for failing to predict the inherently unpredictable. However, they can be faulted on other grounds. Firstly, they participate in the silly game of price targets and calendar-year forecasts even though they know it’s an impossible task that implicitly encourages market timing, an activity that hurts investment performance. Secondly, strategists largely behave like sheep, as pointed out by Salil Mehta from the Statistical Ideas blog.

Rather than advising clients to “stay the course” during the January-February 2016 downturn, they “impulsively” dropped their year-end forecasts, cutting estimates just when the odds were shifting decisively in the direction of bargain hunters (the S&P 500 has soared 25 per cent from its February bottom).

Fourthly, they ignore historical base rates, almost invariably forecasting that stocks will record high single-digit gains. That may sound reasonable, as equities have historically gained around 9 per cent annually.

However, averages can mislead. Stocks can record big gains one year and big losses the next; although gains have averaged nine per cent, returns have historically been in the 0-9 per cent range in only one-sixth of all years. Strategists rarely say stocks will fall over the coming year – according to Salil Mehta’a data, only 8 per cent of strategist projections over the last two decades have been negative, despite declines being relatively common (the S&P 500 has fallen in 24 of the last 90 years).

It’s not that strategists are perma-bulls; although they rarely predict declines, they often underestimate gains over the following year. Note that since 1975, the S&P 500 has recorded annual gains of more than 20 per cent on 16 occasions, or roughly two in every five years.

Strategists know the stats; they know stocks often record big gains and unpleasant losses, but generally do their best to avoid predicting such eventualities. To fault them for a lack of prescience is to miss the point – the true crime is that of intellectual dishonesty.

A more honest approach, perhaps, is to admit the range of potential outcomes is a very wide one. Merrill Lynch, as noted earlier, has taken this approach regarding 2017, estimating the S&P 500 could end up at 2,700 (“euphoria”) or 1,600 (“fizzle”). Morgan Stanley goes further, with a bull case year-end target of 3050 and a bear case of 1625. Such wide estimates may be perceived as unhelpful by investors who take a ‘just tell me what to buy’ approach, but it may be wise to be prepared for a wide range of outcomes in 2017.

Why? Volatility has been stifled by central banks’ monetary policies in recent years. However, financial markets have recently indicated the obsession with the intentions of the Federal Reserve is waning. The gradual normalisation of monetary policy and the transition to fiscal rather than monetary stimulus means volatility may return to more normal levels in coming years.

Furthermore, there is evidence the “curse of the correlations” is ending, says Convergex analyst Nicholas Colas. Correlations have been very high in recent years – stocks and sectors have tended to rise and fall in unison rather than being driven by company-specific news, which has been bad news for stock-pickers trying to beat market indices.

Lately, however, correlations have plunged. In November, average sector correlations to the S&P 500 fell to 57 per cent, lower than any reading over the last eight years. Correlations between non-US equities and the S&P 500 have also fallen dramatically.

2017 will reveal whether the “curse of the correlations” is definitively ending. No doubt, market strategists will have plenty opinions as to which stocks, sectors and countries are best positioned to benefit in the new market regime, but ordinary investors should remember successful investing is not dependent on identifying what’s going to happen over the next 12 months.

Asked recently as to whether Donald Trump’s policies would be good or bad for stock markets, Warren Buffett replied: “I’m not looking at it. I don’t know what the market’s going to do at all. Never have, never will.”

The key point, he said, is that stock markets will rise over the long term. As for 2017, added Buffett, “I have no idea.”

1 Household wealth jumps by 74% since last recession - report
2 Will brother’s widow get half of our parents’ estate when they die?
3 Should I switch bank now with Ulster Bank at risk of closing?
4 EU said to be leaning towards appealing Apple tax decision
5 House insurance: save yourself money by reviewing your policy
6 Facebook unveils €4.7m grant programme for Irish SMEs
7 Banks face ‘hectic’ loan restructuring as payment breaks end, Goodbody warns
8 Pallet manufacturer looks to imports as timber crisis takes root
9 Edwards to create 120 jobs in Dublin as part of $7.5m investment
10 Legal tech company Bundledocs raises €600,000 in funding
Real news has value SUBSCRIBE
Save money on international transfers