US is dominating the global stock market 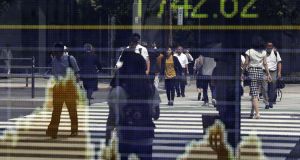 The US bull market is alive and well, with the S&P 500 hitting more all-time highs last week, but things have been nowhere nearly as rosy in Europe, Asia and emerging markets. Is it time for non-US indices to enjoy some relative strength, or will the US continue to lead the way? Investors think the latter is more likely, judging by Merrill Lynch’s fund manager survey for August, which found record-high sentiment regarding the outlook for US profits and the biggest overweight position in US stocks since early 2015. In contrast, Nautilus Research data, which examined previous occasions mirroring the current environment, suggest a relative near-term bounce for European stocks may be more likely. Prognostications aside, the extent of the recent divergence is remarkable. Recent Bespoke Investment data showed 16 of 22 major national markets were in downtrends, with only two non-US markets in uptrends. The S&P 500’s recent outperformance coupled with dollar strength means the US market now accounts for more than 40 per cent of global stock market capitalisation for the first time since 2005, Bespoke noted last week. Japan and China are jostling for second place, both countries accounting for 7.5 per cent, with Hong Kong, Britain, France and Germany lagging further behind. A decade ago, the US accounted for 32 per cent of the global market. By the time of Donald Trump’s election in November 2016, that figure had increased to 36.5 per cent, and the trend has since accelerated. Contrarians could be forgiven for giving up on a trend reversal, given just how long the current run of US outperformance has lasted.

As it happens, the data bears out this theory. Since 1950, notes LPL Research, there have been 18 times where the S&P 500 hit new highs for the first time in at least six months. A year later, stocks were higher on all but one occasion, averaging gains of 12.5 per cent. The longer investors grapple with a particular worry, the more its power recedes. For all the talk of damaging trade wars, markets have been increasingly calm in recent months, preferring to focus on bumper corporate profits. The decisive nature of the recent breakout means it’s wise to continue giving the bull market the benefit of the doubt.

A stock market at near capacity?

1 In six months we will be in the grip of a 1980s-style recession
2 Chartered Land gets green light for Dublin’s tallest tower on Parkgate Street
3 Donohoe warns of cost to State of pandemic measures as public finances deteriorate
4 Avoca wins battle with Monkstown locals over cafe operation
5 Angela Merkel sweeps in to save the euro zone
6 Property price drop of up to 12% this year a ‘reasonable’ assumption – McDonagh
7 Should my mam wait for house prices to drop before buying?
8 Aer Lingus wants quarantine period axed to resume flights in July
9 Google facing $5bn lawsuit for tracking in ‘private’ mode
10 Brother is dragging his heels as executor of uncle’s will - is there anything I can do?
Real news has value SUBSCRIBE
Save money on international transfers