The bitcoin bust, one year on 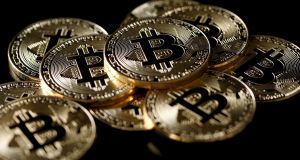 Bitcoin has lost 80 per cent of its value in the last year. Photograph: Benoit Tessier/Reuters

A year ago this week, the price of bitcoin peaked at almost $20,000. Since then, the biggest bubble in financial history has burst spectacularly, with the cryptocurrency losing 80 per cent of its value in a bloodletting that has taught a new generation of investors a painful lesson.

Bitcoin’s 2017 gains were stunning. Below $800 in mid-January, it had almost quadrupled by June, topping $3,000 before promptly falling back to the $2,000 level in July. And then things went completely bananas, with bitcoin soaring to the heavens and enjoying a 10-fold gain over a five-month period.

It couldn’t continue, said the sceptics, and it didn’t. Prices finally crashed and things have been especially difficult lately: bitcoin lost 37 per cent of its value in November alone, falling below $4,000 for the first time in two years.

Other cryptocurrencies have fared even worse, pointed out economist and long-term bitcoin sceptic Dr Nouriel Roubini recently, with every single one having fallen between 80 and 99 per cent.

It had to happen. This was, as Roubini noted, the biggest bubble in history, with bitcoin enjoying a 60-fold increase in the three years prior to its peak. The infamous technology bubble of the late 1990s was a mere pussycat in comparison, rising fourfold over the same time span.

The cryptocurrency craze was encapsulated not only by skyrocketing prices but by the crazed behaviour that accompanies major bubbles. “I’m in, get involved”, former football manager Harry Redknapp tweeted to his army of more than 200,000 followers on Twitter, adding that he was “proper excited” about mobile cryptocurrency. Days before his fight with Conor McGregor, boxing champion Floyd Mayweather was hyping his involvement in an initial coin offering (ICO), adding that people could call him Floyd ‘Crypto’ Mayweather.

A whole raft of other celebrities, ranging from reality TV star Paris Hilton to former boxer Mike Tyson and Hollywood tough guy Steven Seagal, also got on board the cryptocurrency train. A New York Times headline, “Everyone Is Getting Hilariously Rich and You’re Not”, perfectly captured the prevailing mood.

FOMO – the fear of missing out – led to all kinds of insane stock price movements. After announcing it was buying a cryptocurrency company with no revenue, financial technology stock Longfin soared more than 1,300 per cent over a two-day period, giving it a market capitalisation in excess of $3 billion. Shares in UK firm On-Line rose fivefold after it said it was changing its name to On-Line Blockchain, while shares in Long Island Iced Tea more than quadrupled after it decided it was time to rebrand to Long Blockchain.

Crucially, however, the current crash is different in two respects. Firstly, sceptics could not bet against bitcoin in the past. That changed last December, when trading began in bitcoin futures. Professional traders were finally able to short the cryptocurrency and it was no coincidence that this coincided with bitcoin’s price top, says Reformed Broker blogger and Ritholtz Wealth Management chief executive Josh Brown. That was “game over”, he says. “Fever broken.”

Secondly, while bitcoin prices soared between 2011 and 2016, the cryptocurrency remained something of a fringe product associated with geeks, libertarians and criminals. Bitcoin moved into the financial mainstream in 2017, however, when it seemed everyone and their mother was interested in getting in on the action.

Bubbles burst when there is no one left to buy, when everyone has been drawn into the craze. In that sense, Barclays argued in its equity gilt study earlier this year, the cryptocurrency frenzy resembles the spread of an infectious disease that has peaked.

For sceptics such as Roubini, the fact that bitcoin was the biggest bubble in history makes it likely that it will end up suffering the biggest bust in history. Roubini said last month that bitcoin was on its way to zero. Nobel economist Eugene Fama, not known for making extreme predictions, has made the same prediction. Just weeks before bitcoin’s peak last December, Vanguard founder John Bogle scoffed that the price would fall back to $100.

The problem, as multiple observers have pointed out, is that bitcoin is essentially impossible to value as it produces no income or earnings. This made it the perfect bubble – when something is impossible to value, a $500,000 price target can seem as logical as a $500 target.

For the same reason, there is no obvious floor now that prices are collapsing. In a normal market crash, overvalued assets will eventually become obviously undervalued; bargain hunters will start to nibble when prices get cheap enough and prices will eventually bottom out. There is, as Bogle cautioned a year ago, “nothing to support bitcoin except the hope that you will sell it to someone for more than you paid for it”.

The disappointed hordes who bought into the hype can’t say they weren’t warned. “Avoid bitcoin like the plague,” warned Bogle. “Rat poison squared,” said Warren Buffett. “Likely to go to zero,” said Eugene Fama. “It’s such a wonderful story,” said fellow Nobel laureate Robert Shiller, before adding, “if only it were true.” “A bubble wrapped in techno-mysticism inside a cocoon of libertarian ideology,” scoffed Paul Krugman in a New York Times piece titled “Bubble, Bubble, Fraud and Trouble”.

Even Wall Street, which played a large part in inflating dangerous market bubbles in the recent past (in particular, during the late 1990s technology bubble and the housing bubble that led to the 2008 global financial crisis), was minded to steer well clear. A CNBC survey of 44 Wall Street economists and strategists last December found only 2 per cent believed bitcoin’s valuation was based on fundamentals, with 80 per cent describing it as a bubble. JPMorgan chief Jamie Dimon famously labelled bitcoin a fraud; Credit Suisse chief executive Tidjane Thiam described it as the “very definition of a bubble”; even Jordan Belfort, the infamous “Wolf of Wall Street’”, warned off investors, saying bitcoin was a “fraud”.

Bitcoin bulls dismissed such warnings and for a long time were richly rewarded for doing so. That all changed a year ago this week, when the bitcoin bubble finally burst. The 80 per cent fall over the last 12 months is just the start, says Nouriel Roubini; bitcoin and all other cryptocurrencies are on a “funeral march”.