Many get out loans to cover fees and living costs, but sooner or later it’s payback time 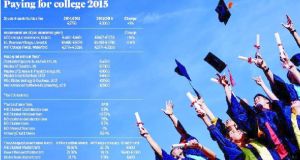 Going to college has always been expensive, and the advent of free fees hasn’t really changed this. Indeed the rising cost of accommodation, plus a hefty student contribution charge, means that for many, the cost of third-level today is an increasingly heavy financial burden.

Indeed there are many parents who find themselves earning just that bit too much for their children to qualify for a grant, but not quite enough to cover the myriad of costs that arise. If this sounds familiar, then an option an increasing number of students are taking is to get a loan.

Kevin Donoghue, deputy president of the Union of Students in Ireland (USI), has observed that more and more students are taking out loans to cope with the ever rising costs of third-level education in Ireland. But, he says, this can put strain on the student to repay the loan, and their family – particularly when the parents don’t want the child to borrow for college – but the child can see few other options.

While lending in some parts of the economy has tightened up, credit is still flowing to students. Banks have always been keen to sign up students with gimmicks and offers, the thinking being that if you get a customer at college age, they’ll stick with you and you’ll be able to sell them mortgages and life insurance in later years.

This is also true of student loans, with banks often far more generous in their lending practices with students than they are with people who actually have an income.

But if you’re a student looking for access to credit, remember that while it may be easy to come by, it can be a lot more difficult to repay, and may become a noose around your neck for some years after you leave your education days behind. And, if you fall behind on repayments during your student years, this may affect your credit rating in later years and your ability to get a mortgage or car loan.

At Trinity College Dublin for example, Bank of Ireland has joined forces with the university to establish Trinity Finance, which offers loans to students to cover this charge. Charged at a rate of 7.5 per cent, the loan can be taken out each year for up to five years, and the maximum term which applies is nine years.

The structure of the loan means you can repay it early without incurring a penalty, thus saving on interest.

However, it is going to work out a lot more expensive than paying the charge upfront.

Consider the example of a student who applies for the loan for each year of their undergraduate degree. While monthly payments will come to just under €150 a month over eight years, the cost of credit will come to a significant €2,271.32. So, those €12,000 contribution charges have now turned into a €14,271 charge.

It’s not just TCD which offers the loan service. Parents of students at Mary Immaculate College in Limerick and others across the country can avail of the product.

AIB offers a similar product, which gives students and their parents a discount of 3 per cent off the standard loan rate, a current rate of 8.8 per cent. AIB also allows students to opt for an interest only structure over the four years of their degree, but you should remember that this will cost more in the long term.

And remember: the Union of Students in Ireland has previously expressed concern about the use of such loans, warning that they may lead to students incurring significant debt, foster a ‘debt culture’ similar to that in the United States and increase inequality in access to third-level education. So tread carefully.

And it’s no surprise given the cost. At the University of Limerick for example, you will pay €4,588 for a one-year graduate diploma course, rising to €9,000 a year for Master of Science in Physiotherapy course.

Over at UCD, a master’s in advanced software engineering almost seems good value at €2,800 a year, compared with €11,550 for a Biotechnology & Business master’s.

And of course these fees apply only to Irish and EU citizens. If you have to pay non-EU fees, then the aforementioned physiotherapy course in UL, for example, will rise to €15,358 a year.

To deal with these fees, then, a multitude of options are available. Bank of Ireland offers a postgraduate loan, which allows students to borrow €7,500 over five years at a variable rate of 5.5 per cent. This means a €5,000 loan will cost an extra €727 to repay, based on monthly repayments of €95.45 over five years. Students also have the option of deferring repayments for the first 12 months.

It can be tempting then to rely on your “flexible friend” to help cover the cost of everyday expenses such as topping up your phone or buying a bus pass, but tread carefully. Just because you’re a student doesn’t mean the banks won’t hit you with onerous interest rates.

Take Ulster Bank. You’ll pay interest of 17.9 per cent on purchases up to €450, or 21.1 per cent if you use your card to withdraw money from your credit card at an ATM. The easiest way to avoid incurring any debt is to either a) repay your credit card in full each month; or b) avoid getting one in favour of a debit Visa or Mastercard.

And look out for deals. AIB for example, will credit €30 to new AIB student credit card holders who sign up by August 19th. This will cover the cost of the annual €30 government levy, at least for the first year.

Another option is to look for an interest-free loan. Most of the banks which offer student accounts now also offer such a loan, with a limit of about €1,500. Bank of Ireland offers an interest-free loan of up to €1,500 a year to students. The offer allows you to defer the first three months’ repayment, but to avoid interest the loan must be repaid in full at the end of the 12-month period. The loan may require a guarantee from a parent. If you find after 12 months that you’re not in a position to repay it, you will be charged interest at 1 per cent per month, or 12 per cent a year.

Similarly, AIB offers an interest-free overdraft on your current account, with a limit of up to €1,000 for first and second year students, and €1,500 for third and fourth years. You’ll also avoid set-up charges of €25.39, but the bank may require your parent/guardian to guarantee the loan.

1 Google tells workers to return to country where they are employed
2 Sean Quinn stunned at rebranding of Quinn Industrial Holdings
3 Probate is changing: What does that mean for you?
4 Will tracker mortgage be at risk if Ulster Bank closes?
5 Seán Quinn on rebrand, Irish golf tourism wipeout, and probate changes
6 Three Ireland switches on 5G network around the country
7 Whistleblower warned EY of Wirecard fraud four years before collapse
8 Subway bread too sweet for zero rating on VAT
9 Me & My Money: ‘Money can’t buy you happiness but it can make life a lot easier’
10 Dublin Aerospace takes over Flybe’s aircraft servicing base in Exeter
Real news has value SUBSCRIBE
Save money on international transfers