It has been a crazy, record-breaking year, with unprecedented twists and turns 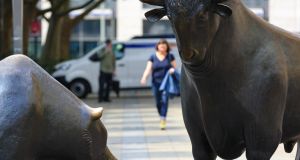 “Risk happens fast,” LPL Research strategist Ryan Detrick commented last week following the sudden market downturn. It certainly does. The S&P 500 enjoyed its best two-day start to September in 10 years; within three days, it had endured its worst five-day start since 1987. The Nasdaq took only three days to go from all-time high to being down 10 per cent – its fastest double-digit correction in history. Indeed, everything is happening fast in 2020.

In March, it took the S&P 500 only 17 trading days to fall into bear market territory, the fastest 20 per cent decline in history. It took 22 days for the index to fall 30 per cent, the fastest-ever 30 per cent drop. Volatility, as measured by the Vix index, hit an all-time high that same month.

History’s fastest bear market was also the shortest; after losing over a third of its value in a month, the S&P 500 subsequently enjoyed its fastest recovery and biggest five-month gain in history.

Even after the recent weakness, the S&P 500 is still in the black for 2020; if stocks hold on to their gains, it would be the first time the index ended the year in positive territory after being down over 30 per cent. This has been a crazy, record-breaking year. September’s action suggests investors should brace themselves for further twists and turns.

1 Air travel never going ‘back to way it was’
2 Will brother’s widow get half of our parents’ estate when they die?
3 Should I switch bank now with Ulster Bank at risk of closing?
4 ‘Tax war’ will hit Ireland if digital tax talks fail, OECD says
5 Majority of submissions favour changing law on forestry licence appeals
6 Electronic benefit transfers put food stamps out of date
7 Pallet manufacturer looks to imports as timber crisis takes root
8 Bord Pleanála clears way for 21-storey tower on former Apollo House site
9 Thinking time: Why it should be essential in every workplace
10 Coronavirus: Over 1m workers may face tax bills of up to €2,800 at end of the year
Real news has value SUBSCRIBE
Save money on international transfers