Stocktake: Rate cut: not a saviour, but not futile

‘Sizeable hit from the coronavirus could easily catalyse a global recession’ 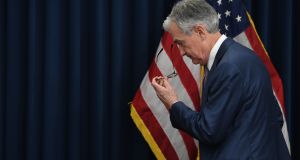 Last week’s rate cut cannot kill the coronavirus, but that doesn’t mean it was futile. There had been a sharp tightening in financial conditions; Bloomberg’s measure of financial conditions showed money had not been this tight since 2015’s China devaluation crisis, notes Bloomberg columnist John Authers.

The same point is made by State Street’s Michael Metcalfe. State Street’s cyclical measure, the KKT index, had been suggesting a “heightened probability of recession” even before Covid-19’s potential economic hit. With global growth expectations already “on the floor”, a sizeable hit from the virus could easily catalyse a global recession, says Metcalfe.

Recession is more likely a case of when, not if, he adds, but the Fed’s early action means it should be “shallow and short-lived”. Sceptics counter that the Fed is nearly out of ammunition.

It normally cuts rates by around 5 percentage points during a rate-cutting cycle, commented billionaire investor and Oaktree Capital founder Howard Marks in a note last week, but rates are already on the floor. Still, Metcalfe is more positive. “Central banks have proven remarkable adept in the past decade at creating room to ease policy”, he says, “even when it appears they are out of options.”

1 How safe is it to go back to the office?
2 Elderly parents living in property you own will save you on capital gains tax
3 More than 40% of help-to-buy recipients already had deposit
4 Most workers now expect choice to work from home part-time
5 Cinema tensions laid bare by deep crack in theatrical release windows
6 Construction workers among first PTSB borrowers off payment breaks
7 Regeneron says its antibody cocktail prevents and treats Covid-19 in animals
8 Owner of Dundrum Town Centre to sell prized assets
9 Stocktake: Is the shoeshine indicator flashing red for stocks?
10 EU may delay digital tax proposals, official says
Real news has value SUBSCRIBE
Save money on international transfers