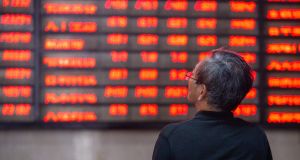 The global equity rally is being led by China, where stocks recently gained more than $1 trillion in value in just eight days.

Margin loans to buy stocks have hit their highest level since 2015. Chinese stocks have enjoyed one of their biggest five-day advances on record. Much of the recent excitement has been generated by state-run media, with the China Securities Journal running a front-page editorial celebrating prospects for a “healthy bull market”.

The problem is that speculative spirits, once unleashed, aren’t easy to contain. Authorities encouraged a big rally in 2015 but it ended in tears, with stocks eventually losing over 40 per cent of their value.

Still, things were more overheated then. Valuations were higher and leverage levels were roughly twice as high as today’s.

Morgan Stanley reckons Chinese stocks can go much higher, partly due to rising retail interest. Additionally, Bespoke Investment notes that while rapid five-day rallies marked major tops in 2007 and 2015, similar instances have historically occurred “in all types of market environments”. Stocks have always been prone to extreme volatility in China, so Bespoke suggests Chinese investors may see the recent move as “nice, but they may still be thinking ‘you ain’t seen nothin’ yet’”.

1 In this strangest of recessions, what happens next for Ireland?
2 Michael O’Leary is the boss you want to lead an airline out of crisis
3 Bank of Ireland sees about 2,000 staff apply for voluntary redundancy
4 Best Covid-19 ‘influencers’ will avoid hectoring
5 Estée Lauder staff at Dublin airport plan further strike action
6 Ireland’s Covid-19 economy in five graphs
7 Dunnes Stores set to enter grocery delivery market
8 Ireland is in danger of losing the woods for the trees on emissions reduction
9 Should I switch bank now with Ulster Bank at risk of closing?
10 Fortnite owner signs multimillion deal to buy Irish ‘kidtech’ firm
Real news has value SUBSCRIBE
Save money on international transfers