If you fear a fall in equity prices, you could consider going short – but it’s not for the fainthearted 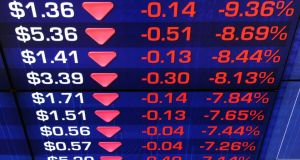 If you feel, like some commentators do, that “irrational exuberance” is back in the markets, you may fear a fall in equity prices. Or you maybe you feel that dollars or sterling have strengthened too much, or that some commodity is ready for a fall.

But, rather than pulling your money out of the markets entirely, you could take a different approach on your investments. You could go short.

In essence, this means taking a bet that markets will fall, rather than rise.

To benefit from such a movement, you need to agree to sell a stock (which you don’t own) at a certain price in the future, on the expectation that its price will fall. If it does, you can buy the stock at that later date at a cheaper price, sell it on for the agreed former price, and pocket the difference. The profits can be enormous. Hedge fund manager John Paulson, for example, famously made about $3 billion to $4 billion when he predicted the subprime crisis and went short on the US housing market, while another famed short seller, George Soros, profited by $1 billion in just one day when he shorted sterling and “broke” the Bank of England. The downside is that if the price of the stock doesn’t fall, you could be sitting on some serious losses.

Don’t expect to be popular

But many argue that short selling is a legitimate strategy, and without it, it can be hard to make profits when markets are falling.

At the peak of the crisis, in 2008, the Central Bank of Ireland prohibited short selling on Irish listed stocks, along with regulators across the world, and chief executives of banks ranging from Lehman Brothers, to Morgan Stanley and HBOS, to Anglo Irish Bank blamed short sellers for their woes. We now know short sellers simply identified the problems in the banking sector before everyone else did.

Indeed famed short seller Jim Chanos has said the most important function fundamental short sellers bring to the market, “is that they are real-time financial detectives”.

How can I go short?

ETX Capital, a spread betting and CFD (contracts for difference) specialist, has about 6,000 products on its platform, most of which can be shorted.

One stock that’s difficult to short, however, is AIB. Given the stock’s unusual valuation, Des Doyle, country manager of ETX Capital, says they frequently get calls from investors looking to short it, but to short the stock, you have to pay a hefty borrowing charge of about 17 per cent a year, which can take away any advantage.

One use of short selling is to hedge long positions you may hold. For example, if you own a number of stocks on one index, if you take out a derivative contract to hold a short position on the entire index, you can protect your portfolio.

“A lot of clients who are long equities but have concerns about the markets utilise ourselves to hedge their long exposure,” he says. This means someone with €100,000 in exposure to US equities might short the S&P index for 25 per cent of that, for example.

“It’s not everyone’s cup of tea, but it can be quite sensible, if you’re long five stocks and short one,” he says.

A short trade can be achieved in a number of ways. Firstly, you can ring your local stockbroker who will borrow the stock, often from a pension fund. Pension funds are typically a major lender of stock, as it allows them to make income on their long term investments.

This can be one of the more expensive routes to take, as the broker will have to borrow the stock and will charge you interest and commission on that. In addition, borrowing fees can be steep when there is little stock to borrow.

To keep costs in check, Brown suggests using platform technology. “It’s the most efficient way if it’s a short-term trade,” he says.

If it’s a foreign-currency trade, such as for a UK or US stock, a foreign-exchange charge of between 0.6 per cent to 1.5 per cent will also apply.

What are the risks?

Put simply, this is an instruction to trade when the price of a market reaches a particular level, and allows you to exit a short trade if the market is moving against you, before you incur hefty losses.

Consider the example of good news coming out about a company during – maybe it’s been taken over or maybe it got regulatory approval for a new drug, for example.

But as it’s out of hours you can’t access a price, so by the time markets open the next morning the share price might be up 20 per cent and you might have lost significantly. “But you can’t do anything about it,” says Browne.

To manage your risk, you could opt for a stop-loss which will sell out of your trade if the share goes up by more than 5 per cent, for example. As with all types of insurance, you will pay a premium for this.

What about spread betting?

As with CFDs, spread betting is leveraged, which means you need to lodge only a certain amount. “The easiest way to place a bet on the market either up or down is spread betting, as there’s no capital gains tax and no stamp duty,” says Brown.

CFDs have a purpose in the market if used appropriately. ETX Capital, a UK financial company with an office in Dublin, recently estimated that between about 50,000-75,000 people in Ireland trade CFDs.

“The appetite for leverage isn’t as high; people are starting to realise that they can utilise these derivatives as an add-on to their portfolio,” says Doyle.

“If you’re using it to leverage yourself into the market, it’s an extraordinarily dangerous thing to do,” says Browne.

If you’re wondering whether to opt for a CFD or to spread bet your trade, tax might help you make your decision.

“If you have a high conviction of your trade going your way, there are simple tax advantages to it. But if you’re slightly concerned go for a CFD,” says Doyle, adding that you will then be able to offset the losses on a CFD against any future gains.

Shortly afterwards, disappointing half-year profits cause the share price of Company XYZ to fall to $20.74.

You can now buy 1,000 shares of the company for $20,740. You then return the shares to the lender, who accepts the return of the same number of shares as they lent, irrespective of the fact that the market value of the shares has decreased.

Shortly afterwards, the price of ABC rises to £1.65. You need to close out to meet your obligation to the lender by returning the same number of shares. You buy 2,000 shares of ABC for £3,300 (2,000 x £1.65). Your broker then returns these to the lender, who accepts the same quantity of shares.

1 PTSB plays down Ulster Bank talk as it sells €1.4bn of loans
2 Housing crisis will be permanent unless there is radical rethink, industry warns
3 Up or down – how much is your Local Property Tax this year?
4 Irish tech company Asavie acquired by Nasdaq-listed Akamai
5 How much state pension will I get next year?
6 Am I crazy to consider switching to an Ulster Bank mortgage?
7 Disposable income in Ireland rose 28% between 2012 and 2019
8 Ghost newspapers and zombie brands are stalking the media
9 Customers say how companies act during Covid-19 reflects their trustworthiness
10 How long can Government afford to keep State pension age at 66?
Real news has value SUBSCRIBE
Save money on international transfers