Mergers and acquisitions, which totalled $4.6tn in 2015, can be indicative of froth 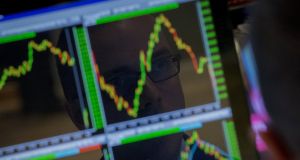 A specialist trader looks at his screen on the floor of the New York Stock Exchange. Photograph: REUTERS/Brendan McDermid

Merger record signals maturing bull run This year has been a record year for global mergers and acquisition (M&A) activity. Might this indicate markets, after a near seven-year bull run, are near a top?

The current fashion for deal-making, then, is worth noting. Nine mergers in 2015 have been valued at $50 billion or more; 58 have been worth more than $ 10 billion – both records. November saw the highest monthly M&A activity on record. Pfizer’s proposed $160 billion merger with Allergan would be the third- largest in history.

There are mitigating factors. Companies are awash with cash and interest rates are at record lows. Adjusted for inflation, M&A activity remains below 1999 and 2007 levels.

Valuations don’t appear heady – about 6 to 7 per cent of global market capitalisation, says Citigroup, compared to 10 per cent in past years.

Current M&A activity is characteristic of a maturing bull market. Arguing a market peak is necessarily imminent, however, is overdoing it. Odds against Amazon ascent Amazon has been on fire in 2015, more than doubling in price.

Doubters say the stock, which trades on more than 900 times earnings, is overpriced. However, that argument has been doing the rounds for years, and yet Amazon has soared 1,500 per cent over the last decade. Can it continue to defy the sceptics?

Whatever about 2016, analysis by money manager Patrick O’Shaughnessy suggests the next decade will not be another glorious one for shareholders.

Stocks appreciate by an average of 7 per cent annually, equating to a doubling over 10 years.

To do so, O’Shaughnessy calculates, Amazon earnings would have to grow by 55 per cent annually over the next decade.

Best bets give sleepless nights Investors like to dream of finding the next Amazon. Finding tomorrow’s big winners and holding on to them are two different things, however.

Ritholtz Wealth Management director of research Michael Batnick last week analysed the 10 top-performing stocks of the last decade. The list included names like Amazon, Apple and Netflix, with returns ranging from 1,388 per cent to 5,823 per cent.

While those returns are spectacular, you had to endure sleepless nights to get them. Nine of the 10 stocks more than halved in price. Although they returned gains 23 times larger than the S&P 500, only two of the 10 stocks hit all-time highs more often than the index. A third of the time, the stocks were languishing in bear markets (defined as a fall of at least 20 per cent from their high).

“If you’re looking at long- term charts and playing the coulda, woulda, shoulda game, don’t kid yourself,” says Batnick. “It’s never as easy as it looks.” Hedge funds bemoan markets Spare a thought for hedge fund managers. They’ve endured another lousy year – the average fund is flat in 2015 – but it’s not their fault. No, it’s the fault of those pesky financial markets.

“We are living in a new sort of world, where large moves in markets are happening, but they happen very quickly and more abruptly, being condensed into a few days rather than a few months,” an anonymous hedgie told the Financial Times last week. “These moves are very, very difficult to trade.”

Many funds had chosen the right bets, the article explained, but they “lost their nerve” due to “painfully volatile” trading conditions.

Really, you’d laugh if a newbie trader came out with such guff; it’s like saying: “I was nearly right, but then some unexpected stuff happened.”

Hedge funds have underperformed equities every year since 2008. During that period, they complained central banks were suppressing volatility, and promised to deliver the goods when times got tricky.

Things finally did get tricky in 2015 – just a bit too tricky, it seems.