Pensions and retirement age no longer fit for purpose 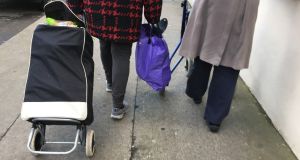 People are living longer than previous generations – with rising retirement ages we need our pensions to work for us for longer. Photograph: Bryan O’Brien

Pensions can be difficult to understand. But it boils down to a couple of key points:

– the longer you live, the more retirement costs, and;

– someone has to pay. It’ll either be you through a private pension or the State through its Social Insurance Fund, which, of course, is also funded by you as a taxpayer, or a bit of both.

People are living longer than previous generations. And, with rising retirement ages, that means we need our pensions to work for us for longer.

Private pensions are generally underfunded and will leave many people in penury at some point. In any case, only half the private sector has such a thing. For the rest, the State pension is creaking under its increasing burden.

And that will only get worse as demographic change means more older people are relying on a smaller number of active workers to foot the bill. One way to bridge the gap is by working in some capacity for a bit longer.

In a world where our sixtysomethings are increasingly healthy and active, and where the Economic and Social Research Institute shows continued employment in some form has benefits for mental and physical health, it surely behoves those representing workers and those speaking for older people to look constructively at what this new age of work might look like.

They could start by working to end employers’ attachment to forcing workers on to a scrapheap at 65 under contracts that were drawn up and agreed under rules that no longer exist. This is going to become a bigger issue as the State retirement age rises to 67 in 2021 and 68 in 2028.

The Government has said it will look at action if employers don’t move to change. But there is concern at whether it has the political will to do so.

The unions, through the Irish Congress of Trade Unions, and those representing older, and generally more healthy, people, like Age Action, might put the minds of those they purport to represent more at ease if they focused their energy on this instead of trying to turn back the hands of time.