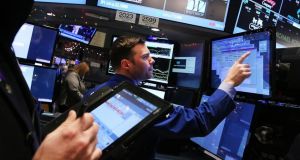 Traders at the New York Stock Exchange. Two-thirds of investors surveyed in the wake of the global financial crisis believed the S&P 500 fell in 2009; in reality, it soared 26 per cent. Photograph: Spencer Platt/Getty Images

A simple question to start: in the last 20 years, the proportion of the world’s population living in extreme poverty has:

(b) remained more or less the same; or

(c) almost halved? Well done to those who said things are getting better. Extreme poverty has indeed almost halved.

If you thought the picture was gloomier, well, you can console yourself that you’re far from alone – more than 90 per cent of people get it wrong, according to international surveys carried out by the late Swedish statistician Hans Rosling. In his book Factfulness, published posthumously in 2018, Rosling noted the same pattern was evident in relation to questions pertaining to issues such as vaccination rates, education levels for girls and life expectancy.

Not only are people “systematically wrong”, says Howard Marks, the billionaire founder of Oaktree Capital, “but they’re wrong in the same direction, which is they always pick the more pessimistic answer when the more optimistic one is true”.

Marks is interested in Rosling’s work because this bias towards pessimism has obvious implications for investing. Certainly, Rosling’s data indicates professional money managers are unlikely to be any different.

“Highly numerate” and highly educated people, including investment bankers and executives in multinational companies, scored just as badly on the questions as everyone else, he noted, adding that “some of the most appalling results came from a group of Nobel laureates and medical researchers”. At an annual gathering of global finance managers at the headquarters of one of the world’s largest banks, Rosling found almost all of them believed a minority of the world’s children had been vaccinated; in reality, 88 per cent had been vaccinated. As vaccines must be kept cold on their long journey from the factory to the arm of the child, they require the same kind of infrastructure needed to establish new factories.

“The fact that 88 per cent are vaccinated but major financial investors believe it is only 20 percent indicates that there is a big chance they are failing at their jobs by missing out on huge investment opportunities,” Rosling cautions. On another occasion, Rosling was asked to present his data in Edinburgh to a gathering of capital managers and their wealthiest clients, the conference manager explaining that he was having a hard time explaining to his clients that the most profitable investments were to be found in Asia and Africa.

Most of his clients, he told Rosling, had a “static view of the world” and were “unable to see or accept” the ongoing progress in many African countries.

At the World Economic Forum in Davos in 2015, Rosling found the attending experts got it badly wrong when answering his questions about future population growth and the availability of basic healthcare.

“Here were people who had access to all the latest data and to advisers who could continuously update them,” Rosling writes. “Their ignorance could not possibly be down to an outdated world view. Yet even they were getting the basic facts about the world wrong.”

A number of factors are at play, including what Rosling calls the “destiny instinct”. One fund manager at the aforementioned Edinburgh conference was unmoved by his data, telling Rosling there was “not a snowball’s chance in hell that Africa will make it . . . It’s their culture, you know. It will not allow them to create a modern society. Ever. EV-ER”.

However, Rosling’s data shows societies and cultures “are not like rocks, unchanging and unchangeable”. Rather, they move. Iran was home to the world’s largest condom factory in the 1990s; boasting a highly educated population, it now has a lower birth rate than the United States and Sweden. “To control the destiny instinct,” Rosling writes, “remember slow change is still change.” Secondly, people have an “overly dramatic world view” and our brains “often jump to swift conclusions without much thinking”. These hardwired instincts helped our ancestors survive in more dangerous times but we must “learn to control our drama intake”, which can lead us “terribly astray” and prevent us “from seeing the world as it really is”.

Rosling’s words are echoed by British money manager and behavioural finance expert James Montier, who has said the biggest danger faced by investors is being seduced by the “siren song of stories” and the fact that people “will abandon evidence in favour of a good story”.

The same point is made by Morgan Housel of the Collaborative Fund, who warns against an “attachment to financial entertainment”. Money is emotional, says Housel, “and emotions are revved up by argument, extreme views, flashing lights and threats to your well-being”. Compounding this problem is the fact that people have an inbuilt negativity bias. Countless studies show negative experiences and emotions have far greater impact than positive ones – “bad is stronger than good”, to use the famous phrase coined by social psychologist Prof Roy Baumeister.

This negativity bias causes people to downplay the positives and to see things as worse than they really are.

Again, investors are no different in this regard, as shown by Franklin Templeton surveys in the wake of the global financial crisis. Two-thirds of investors believed the S&P 500 fell in 2009; in reality, it soared 26 per cent. It gained another 15 per cent in 2010, but half of investors thought stocks were flat or had fallen. Stocks eked out small gains in 2011, but 70 per cent thought indices had fallen. A separate Gallup study found only 7 per cent of Americans knew stocks gained 32 per cent that year; a third thought indices had fallen or were flat.

The media, too, plays a large role in fostering an unnecessarily bleak world view. The only time stock markets make the front page is when indices are falling fast and it would be naive to expect this to change.

“I cannot see even the highest-quality news outlets conveying a neutral and non-dramatic representative picture of the world, as statistics agencies do,” Rosling writes. “It would be correct but just too boring. We should not expect the media to move very far in that direction. Instead it is up to us as consumers to learn how to consume the news more factfully, and to realise that the news is not very useful for understanding the world.”

Like regular exercise and a healthy diet, Rosling recommended that “factfulness” be part of people’s daily lives, helping us to replace our “overdramatic world view with a world view based on facts”.

For investors, the potential benefits are obvious. For example, market downturns tend to be reported as scary affairs, but investors might be less unnerved by volatility if they realised just how normal it is; as Morgan Housel has noted, US indices increased 2,000-fold between 1928 and 2013 but lost at least 20 per cent of their value 20 times during that period. A “fact-based world view” is not only more useful for navigating investing life, it is also more comfortable. As Rosling concludes: “It creates less stress and hopelessness than the dramatic world view, simply because the dramatic one is so negative and terrifying.”