Club fundraising is difficult, particularly in these times, but there are ways you can help boost your club’s funds 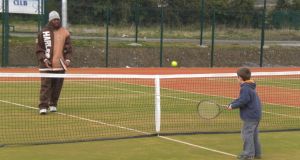 Anyone for tennis? Ratoath Tennis Club – enjoying the club today

It is estimated that some 500,000 Irish people regularly volunteer in their local sports club, giving their time and effort to support their community. Fundraising to keep a club alive has always been difficult – but particularly so in the current environment. Nonetheless, there are ways you can help boost your club’s resources.

Get involved
Back in 2007, a committee of 12 people came together to create a tennis club in Ratoath, Co Meath. Entrepreneur Damian Scattergood was founding chairman of the committee, which was tasked with the job of raising €200,000 to build the tennis courts and get the club up and running.

Key to its success was getting a group of people with diverse skills who were willing to commit themselves to the project and see it through.

And the rewards are there.

“Two years, 12 people and hundreds of hours of work. Now we all play tennis together,” he says.

Apply for grants
The National Lottery-funded Sports Capital Programme allocates funding to projects that are directly related to the provision of sport or recreational sport facilities.

For example, in 2012 Virginia Rugby Football Club in Co Cavan got an allocation of €50,000 under the scheme, and Macroom GAA club in Co Cork got €70,000. It is also possible to apply for lower amounts – Longford Swimming Special Olympics Club received €1,900 that year, for example.

While the money is available, though, it can be a time-consuming process. Ratoath Tennis Club got a grant of about €90,000 from this source. However, as Scattergood notes, “a huge amount of work went into this”. He recommends that clubs keep accurate and up-to-date accounts and records.

Applications will typically require information such as financial statements, a business plan and future cash projections. Applications for the 2014 Sports Capital Programme opened on January 17th; organisations must register for the grant by 5pm on this Friday. The deadline for applications is 5pm on Friday, February 28th.

Tax relief
Provided that your club or association is deemed eligible by the Revenue Commissioners, you might be able to claim tax relief – hence boost your donations – for any “approved projects” your club is looking to undertake, such as developing facilities or acquiring land.

The minimum amount eligible under the scheme is €250 and the project should not cost in excess of €40 million.

The scheme works by deeming donations to be granted net of income tax – which means that the club is entitled to claim a refund on the grossed up amount. So, for example, a €580 donation from a taxpayer liable to tax at 20 per cent will amount to €725 once the club claims back the tax.

Similarly, a donation from a taxpayer liable to a 41 per cent tax rate will amount to €1,000 for the club.

Get fundraising
Lotteries have become increasingly popular as a way of raising funds for clubs around the State. Setting up a lottery means you will need to get a licence, which is usually easy enough to obtain and involves filling in one application form and attending the district court. The maximum jackpot allowable under such a licence is €20,000.

To help with this task – and maybe also obtain your licence – you can use a service provider such as locallotto.ie. This allows people to sign up to their local club’s lotto online and helps the club’s committee to run it effectively. The service costs €225 to set up, while a per transaction fee also applies to cover banking and credit card fees. It is particularly popular with GAA clubs throughout the State.

If you’re holding a public raffle, you will need to obtain a Garda permit. One way the GAA recommends to boost sales is to offer ticket sellers a prize themselves, so the person who sells the most also gets a prize.

When it comes to raffles, Scattergood’s advice is to break it down into manageable amounts. For example, say you want to raffle off a small car which costs €13,000. This means that you will need to sell 650 tickets at €20 just to pay for it. To make a decent profit for the club, you will need to sell twice as many, or 1,300.

Other options include table quizzes, sponsored runs, cake sales and just about anything you think that can raise funds.

Get advice
Sometimes, paying for a little advice can end up paying for itself in terms of the increased revenues your club might generate. Just be sure that your money isn’t being wasted.

Pallas Marketing in Nenagh, Co Tipperary. for example, coaches organisations to fundraise professionally on a no-profit, no-fee basis. Scattergood is running a seminar on “How to grow, promote and finance your Club”, at the Clarion Hotel in Liffey Valley on February 12th.

And remember, with sponsorship, it should be about more than just taking the cheque.

“Engage with your sponsors,” Scattergood advises. “If someone sponsors/advertises with you, they do it for a reason. They want to help. So make sure you let the person know how their money helped. Invite them to your open days, show them the new balls, jerseys for the kids etc. If you engage with your sponsors, they are more likely to come sponsor or help you again.”

Get creative
John Looby, fund manager with Setanta Asset Management, has been involved with NUIM Barnhall in Kildare since he was nine. So when he recently published a collection of his opinion pieces on the challenges faced over the past few years, Troubled Times: Investing Through the Troika Press, he decided to donate the proceeds from sales of the book to the rugby club, as a way of “giving something back” for all the years of enjoyment the club has given him.

“Clubs are under pressure with traditional revenue streams such as bar takings, grants from parent bodies and the ability of club members to contribute to the likes of club draws or functions all down in recent years.Therefore, clubs have had to become more creative in their approach to raising funds,” he says.

Examples of this are the trend in staging white-collar boxing or Strictly Come Dancing or Take Me Out nights to broaden the appeal beyond the club and to try and raise funds from the local community.

Pallas Marketing runs “Who wants to be a thousandaire?” nights for clubs, and is set to launch its new show, “the €20,000 drop”.

White-collar boxing has also become popular, with organisations such as whitecollarboxing.ie running fundraisers for clubs.

Another option is to use resources such as sportsprophet.ie to boost resources. It runs a league on behalf of a club, with club members signing up to offer their predictions on a defined number of sporting events taking place throughout the year. The top-performing members with the most points accumulated in their respective league will win cash prizes, decided upon by the club.

Clubs have to pay a registration fee to use the site – it’s currently offering a 25 per cent discount on this €200 fee – as well as setting aside some funds for prizes, but the club then charges its members either €10 or €20 to take part in the league.

Membership
Even if it’s just a nominal sum, membership fees can add up. Consider a club which charges €100 a year – over 20 years this means that just one member will contribute a not insignificant €2,000 in membership fees alone.

Remember, a member is often worth a lot more than just their membership fee. “They are advocates for you club. They can tell other potential members about you. They can help buy or sell tickets. They contribute time and energy to your club,” Scattergood says.

For clubs that don’t charge membership fees, the GAA recommends charging an entrance fee to watch matches. A hundred people paying €2 each time can add up.

TV PROGRAMME
Copy a successful television programme, such as Take Me Out or Strictly Come Dancing

SPONSOR
Find a sponsor for everything you can think of: club uniforms; banners on the playing fields; seating areas; competitions; fencing; signage in the club-house; the provision of shrubs and flowers

RAFFLE
Hold a raffle – and have a weekly sales target

AUCTION
Stage a sale of work or auction