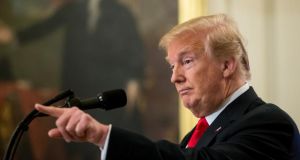 Investors were alarmed by US president Donald Trump’s recent threat to keep hiking tariffs on Mexico if it doesn’t take steps to stop illegal immigration to the US. Photograph: Michael Reynolds/EPA

Donald Trump has been quick to take the credit for stock market gains during his presidency but 2017’s talk of a “Trump bump” is long gone, with investors instead worrying that markets are now in the middle of a “Trump slump”.

The S&P 500 soared in 2017 as investors priced in Trump’s planned corporate tax cuts but has gone nowhere since being signed into law 18 months ago – the “Trump slump”, as Yardeni Research strategist Ed Yardeni dubbed it earlier this month.

Like other investment strategists, Yardeni is concerned by Trump’s unpredictable trade policy towards China and beyond. Stocks had climbed in each of the first four months of 2019 “only to be hit in the face with Trump’s tariffs and an escalating trade war” in early May.

Periodic market declines are, of course, perfectly normal. The S&P 500 has experienced declines of at least 5 per cent in 65 of the last 70 years, notes Ben Carlson of Ritholtz Wealth Management. Stocks had raced ahead in the first four months of the year, gaining 18 per cent – the best start to a year since the equivalent period in 1987 – so it could be argued that too much should not be read into the recent declines.

Trade war Nevertheless, Trump cannot escape the blame, says Yardeni, who says stocks “kept going up only to be hit in the face” in early May after a Trump tweet threatening China with more extensive tariffs.

Others are similarly concerned. The World Bank recently cut its 2019 global growth forecast, cautioning that “heightened policy uncertainty, including a recent re-escalation of trade tensions between major economies, has been accompanied by a deceleration in global investment and a decline in confidence”. US banking giant Morgan Stanley goes further, warning that a global recession within three quarters is possible if the US follows through on threats to impose further 25 per cent tariffs on Chinese imports and China retaliates.

As for the impact on stock markets, negative trade headlines erased 6 per cent of the S&P 500’s value in May alone, estimates Renaissance Macro Research. Deutsche Bank strategist Bankim Chadha suggests the S&P 500 would be about 17 per cent higher today were it not for the trade war, saying it has cost US equities some $5 trillion in market capitalisation.

Trade tensions have been central to preventing a recovery in global growth and in keeping US indices range bound over the last 18 months, Chadha said in a recent note. As a result, it is “fast becoming comparable to the impacts of the European financial crisis and the dollar and oil shocks on US equities”.

Investors were similarly alarmed by Trump’s recent threat, since rescinded, to keep hiking tariffs on Mexico if it didn’t take steps to stop illegal immigration to the US.

Trump’s trade policy approach “had set new benchmarks of incoherence and irresponsibility” even before the Mexico threat, complained billionaire businessman Michael Bloomberg, but this “takes the cake”. Echoing that, Ritholtz Wealth Management chief executive Josh Brown complained the Mexico threat was especially troubling because it was the first time the tariff threat has been used for overtly political rather than economic purposes.

“Markets are now pondering the threat of tariffs being used for all manner of disputes between Trump and the rest of the world”, added Brown. “What if someone sends a tweet he doesn’t like? What if he’s snubbed at a summit? Do we just start blowing up trade agreements in retaliation?”

Federal Reserve The US president’s attitude towards the Federal Reserve, too, is troubling. Traditionally a non-partisan body peopled by expert economists and technocrats, Trump has recently attempted to politicise the institution, nominating controversial economist Stephen Moore and Tea Party activist Herman Cain to the Federal Reserve board. Both attempts failed, although Trump is now thought to be considering the appointment of Judy Shelton, an economic adviser to the president who has been an outspoken critic of the central bank and who wants the US to return to the gold standard – a position dismissed by almost all mainstream economists.

“Hers would be a dangerous appointment,” said economist and former US treasury secretary Larry Summers, who describes Shelton as falling “well below” Cain or Moore as a potential governor.

Possible appointees aside, Trump’s frequent complaints that the Fed has kept interest rates too high have provoked concern that the Fed may keep rates higher than is ideal, in an effort to show it will not be pushed about by the president. Such fears may be unfounded – stocks enjoyed their biggest one-day gain since January a fortnight ago, when Fed chairman Jerome Powell indicated he would be prepared to cut rates if trade tensions jeopardise the US economy – but there’s little doubt that investors would prefer if Trump was more willing to respect the Fed’s independence.

Trump “is probably the most bullish and bearish president we’ve ever had”,Yardeni said during the last major market downturn in December – bullish, in that his tax cuts and deregulatory zeal were good for corporate profits, and bearish, in that he is the unpredictable and self-described “tariff man” who seems to think he knows more than economic experts.

Corporate America’s uneasy positioning is encapsulated by the actions of the US chamber of commerce, which has both praised his tax cuts as a “historic moment” as well as warning it was prepared to take legal action to prevent Trump from hitting Mexico with steep tariffs.

Nowhere fast The problem for investors is that it ha

s been some time since bullish Trump has been in evidence. For all his bragging about stock market gains and all-time highs during his presidency, the S&P 500 has averaged annualised gains of 12 per cent since Trump’s election win in November 2016 – in line with its post-second World War average. Almost all of those gains came in 2017, when stocks gained 22 per cent.

Since then, stocks have gone “nowhere fast”, as Yardeni puts it. That may change – a de-escalation of trade tensions would see equities “jump for joy”, but a further ratcheting up of trade tensions could risk a bear market, says Yardeni, as nervy investors deal with the “Trump slump”.