Looking to retire abroad? Revenue has just made it harder

If you’re chasing a tax free retirement in Portugal, a new ruling may make you think twice 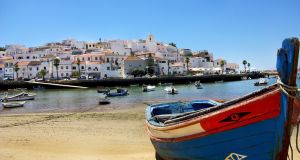 To stay invested in retirement via an approved retirement fund while living tax-free abroad, you’ll need to be wary of a new Revenue ruling.

Thousands of people dream of living out their final days in warmer – and cheaper – climes. But for a new generation of pension savers, the Revenue Commissioners has just made it more difficult – and potentially more costly.

The Revenue has published a clarification on how it treats pension savings, such as approved retirement funds (ARFs) and approved minimum retirement fund (AMRFs) for Irish non-residents, which are typically taken out by defined-contribution pension savers once they enter retirement. It means that paying tax on your pension abroad – rather than in Ireland – may now be more difficult to achieve, as the Revenue is to treat an ARF as “capital” rather than a pension fund.

“Normally, with a pension payable to a non-resident individual, a double taxation agreement would typically allow for the pension benefit to be taxed in the country of residence in retirement,” said Munro O’Dwyer, partner with PwC. “For ARFs, this will not be the case per the clarification.”

He said the move will likely increase the taxation payable by non-resident ARF holders, as well as making the calculation of this tax more complicated, given that different rates might apply to ARF drawdowns, or “capital”, and returns on the fund such as deposit interest.

With effect from December 22nd, following the Revenue notice, the retiree will have to make sure that the income and/or gains are taxed correctly as per the double taxation agreement between Ireland and their country of residence.

It means that any PAYE taxation deducted under Irish withholding tax rules will now only be refunded where a double taxation agreement between Ireland and the country in which the pensioner is living exists and covers that type of payment, Mr Munro says.

Johnny Mulholland, managing director of International Pension Transfer Consultants, agrees that the decision will have a significant impact.

“Those [expats] with ARFs will have to spend a little more time making sure that their tax affairs are in order, both in Ireland and their county of residence.

“Those who are yet to reach retirement but are thinking of retiring abroad have the advantage of planning for that eventual move and have more options,” he said.

One option to avoid this ruling is to opt for an annuity, which offers a guaranteed income in retirement, over an investment fund such as an ARF, as this is treated differently by Revenue.

However, unless obliged to do so, by virtue of being a member of a defined-benefit scheme, most retirees could stand to lose financially, given the poor annuity rates on offer in the current low interest rate environment.

Countries like Portugal, which allow you to pay no tax on foreign sources of income for the first 10 years, as well as Spain and France, have long been popular with Irish retirees looking for a better standard of living at a lower cost.

Whether Irish residents looking to live tax-free in Portugal, for example, will be able to avoid Irish PAYE withholding tax on their ARF drawdowns , or seek to recover it, will now depend on the nature of the double taxation agreement (DTA) between Ireland and Portugal.

“This is very different to an annuity, which would not suffer PAYE withholding in Ireland, and would simply be taxed in Portugal under the DTA (at the 0 per cent tax rate),” said Mr O’Dwyer, adding, “As can be seen, these are very different taxation outcomes.”

The clarification also means that, in some cases, Irish pensioners looking to retire abroad may be better-off transferring their Irish pension fund to their country of residence or to another third-party European jurisdiction.

“In some situations, the tax treatment of local pensions or the double taxation agreement between the country of residence and a third party European jurisdiction may be more favourable,” Mr Mulholland said.