October 3rd, 2018: Up to 10,000 people, of all ages and from across the country, gathered at a rally outside Leinster House in Dublin on Wednesday demanding an end to the housing crisis. 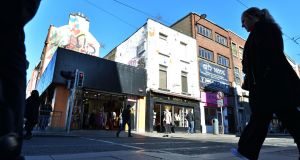 Dublin city. According to Dublin City Council, 33 loans, worth €7 million, or an average loan of €212,840, have been drawn down by the end of September. Photograph: Alan Betson

The loan scheme allows putative homebuyers to avoid Central Bank loan restrictions and lock in to low-cost interest rates of as low as 2 per cent by applying for a home loan with their local authority, and is part of the Government’s three-pronged approach to make homes more affordable, which also includes rental and purchase schemes.

According to Dublin City Council, 33 loans, worth €7 million, or an average loan of €212,840, have been drawn down by the end of September. Given a deposit of 10 per cent, this would indicate an average purchase price of €236,488 for users of the scheme in Dublin city.

The council reported that 345 applications had been received by the end of that month, and of these, 225, or 65 per cent, have been approved, indicating a rejection rate of just 35 per cent.

This is a higher approval rate than other councils have reported, with figures from the Department of Housing indicating a rejection rate of 61 per cent, with 2,933 applications received since last February, and just 1,134 approved. Not all loans that have been approved will be drawn down. It is the role of the credit committee at each local authority to make the final decision on applications for loans.

One of the challenges of the scheme has been the requirement to take out mortgage protection through the council to which the homebuyer is applying.

Applicants to the Rebuilding Ireland Home Loan scheme, as with all local authority funding, must also apply for mortgage protection insurance through the Local Authority Group Scheme with a fixed provider at a group rate. It applies at a rate of 0.555 per cent on the outstanding capital loan balance. So for example, someone applying for the top rate of the affordable loan, of €288,000, will have to pay €133.20 each month for the loan. This can affect applicants’ ability to qualify for the loan, as it substantially increases the amount of mortgage protection they must pay each month. The mortgage protection offered through the councils is also substantially more expensive than that available through other providers.

Minister for Housing Eoghan Murphy has said that the home loan scheme is under review to examine certain “inconsistencies”.

1 British exceptionalism backfires in style as Johnson tests positive for coronavirus
2 Wetherspoon’s panto-villain chairman may have the last laugh
3 UK needs to be honest about its Covid-19 strategy
4 Will Covid-19 force Primark to rethink decision not to sell online?
5 Volkswagen burning through €2bn in cash per week
6 Remote working doesn’t suit everyone, and it exposes woolly leadership
7 Mobile, broadband suppliers to be given extra radio spectrum
8 Rivian takes on Tesla with big batteries and subtler approach
9 ECB orders banks to freeze dividends and share buybacks
10 Retail landlords worried rents will dry up during Covid-19 crisis
Real news has value SUBSCRIBE
Save money on international transfers