I've been shut out of the will by my stepmother 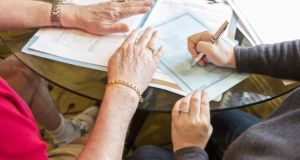 Everything my father worked for all his life has been left to the others and not even a photo have I received. Photograph: Getty Images

My father died and my stepmother lived. She has not mentioned me in her will. She had a daughter before she married my father. They had two children together. Everything my father worked for all his life has been left to the others and not even a photo have I received. Can I do anything to claim a fair share ?

Separately, I was left some money by my mother-in-law. Her son is executor of the will. He has only paid me half what I was to receive and refused to pay the rest, saying he can do what he likes as he is the executor.

He also refuses to pay his dead brother’s only child her father’s share which the will stated she should get as her father is deceased.

You really are not having a lot of luck with wills, are you. It is unfortunately not uncommon for disputes to arise over wills, as readers of this column will know. Often, some gentle diplomacy – with the implied big stick of the hassle involved in potential legal action – will sort out bruised egos and misunderstandings. But not always.

There has been an increase in legal actions concerning wills in Ireland in recent years. Legal professionals suggest there are two driving forces behind this. First, Ireland is now a wealthier place and thus there is more to fight over. Second, as the demographic bulge in Ireland ages, there are more people dying and therefore more wills to get upset at.

You are at the sharp end in two very different scenarios here and, although I clearly have only the briefest outline of the circumstances, my suspicion is that a different outcome is likely in each.

In the first case, your stepmother has outlived your father. It is not clear whether she has yet died but, either way, you seem to be aware that her will provides only for the two children she had with your father and a daughter she had prior to meeting him.

The first thing to say is that people have a wide amount of discretion in how they leave their estate under Irish law. But wills are also legal documents and, particularly with more disrupted family units and more modern forms of relationship, precision can be important in writing a will to ensure that it caters properly for those you intend to benefit.

Any dispute will ultimately go before the courts if it cannot otherwise be resolved. Cases can be long-running, complex and costly to all parties and, ultimately, will be decided on the letter of the law.

There are several grounds for disputing a will.

First, a person can argue that the deceased suffered from a lack of capacity at the time the will was drawn up – ie, they were intellectually incapable of understanding what they were doing. Simply asserting so will not get a plaintiff anywhere; you’d need evidence to back up such a claim.

Second, a plaintiff can claim that the deceased came under undue influence in drawing up the will. In this case, you would be arguing that either one or all of your step-siblings conspired to persuade your stepmother to favour them, actively or otherwise leaving you with no inheritance.

Again, a court would need some persuading on this issue.

Third, and, in your case the most likely cause of action, is that your stepmother failed to adequately provide for you in her will.

Section 117 of the Irish Succession Act 1965 states: “Where, on application by or on behalf of a child of a testator, the court is of opinion that the testator has failed in his moral duty to make proper provision for the child in accordance with his means, whether by his will or otherwise, the court may order that such provision shall be made for the child out of the estate as the court thinks just.”

There are a lot of caveats here but, most importantly, the fact that you are one of the children does not automatically mean you have a right to a share of the will. It depends on your circumstances, financial and otherwise, and also on your relationship with your stepmother and on any other provision that may have been made for you by her or by your father.

In the first instance, assuming probate has been granted, you must make an application to the court within six months of that date. If you’ve missed that deadline, it is most unlikely that you will be entertained.

And, even if you do, there is no guarantee that you will receive anything at the end of the day.

The second case you mention – where the executor to your mother-in-law’s estate has allegedly failed to carry out her wishes as stated in her will – is much more clear-cut. They have no choice. There is certainly no way that he can “do what he likes”, regardless of what they think themselves.

The role of executor is very tightly framed by law: there is no discretion for an executor to carry out part of the instructions in a will and ignore others.

If your mother-in-law stated in her will that you were to receive a specific sum or items of jewellery say, then that is what must happen. The only exception – unless of course the will is successfully challenged – is where commitments are made in a will only for it to emerge that insufficient assets remains after debts have been cleared to meet them all.

Most wills arrange for certain bequests or legacies and then provide that the residue is divided equally among however many beneficiaries. Bequests/legacies come first. But, if they exceed the amount available, something called “abatement” kicks in. Essentially, it means that all legacies are reduced pro rata so that everyone receives the same proportion of their promised legacy. And, naturally, there will then be no residue.

The executor cannot, for instance, favour one beneficiary – say a brother over a daughter-in-law or over the child of a dead brother. They have no discretion in this regard.

Now they do have 12 months to sort out affairs before their failure to do so can be challenged. But if that has passed, you need to get your solicitor to contact the executor or their legal adviser to require them to hand over the full legacy left to you by your mother-in-law. The woman’s grandchild who you say has been similarly disenfranchised should do the same.

If the facts are as you have outlined, no court will protect the executor. And they are legally and financially liable over any failure to execute their duty.

These things always take longer than seems reasonable but I can see no reason why you would not win in the second scenario as you have outlined it. On the first, I am more circumspect. That is down to the court and you may need to think through whether any likely benefit, if successful, outweighs the financial and personal cost of pursuing it.