A cashless society might not be a fair one

Cashless payments may be fashionable, but we must be careful not to leave some people behind 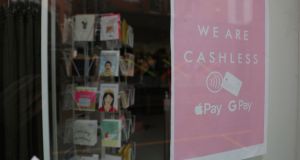 Has it happened to you yet? You’re in a shop, but realise you’ve forgotten your card, or your phone, or however you tend to pay these days. There’s a sign above you saying “digital payments preferred” and a line of impatient customers behind you. You scramble around your bag or wallet looking for some grubby notes or coins, and then, almost shamefully, hand them over, hoping no one questions your method of payment.

If we had been heading leisurely towards a cashless society for some years now, the advent of the Covid-19 pandemic has accelerated us rapidly towards this brave new world where cash is no longer thrown into a collection basket at Mass, charities operate digital donation boxes and even the flower sellers on Grafton Street take contactless payments.

In this world, “cash” is no longer king.

While the focus on digital payments first arose due to fears that the virus was being transmitted via notes and coins, the preference for cards over cash has remained, even as these fears have been disproven.

Increasingly, shops and hospitality outlets across the country are not just expressing a preference for cards, they’re giving up on cash completely. Oliver Bonas, a UK lifestyle brand, told its customers at the end of 2020 that all its stores, including its outlet on Dublin’s Exchequer Street, are now “completely cashless”, while coffee chain Bear Market now runs a number of cashless outlets, including those at Decathlon in Ballymun and the IFSC, and Swedish furniture giant Ikea is also only accepting card payments (when it’s open).

In many respects, the rush to digital is not surprising. Cash has a cost; it has to be printed, stored, secured, counted. And for the consumer, digital payments are quick, easy to track, and in the current environment at least, don’t come with a social shame.

While many of us have embraced everything from Fitbit pay to contactless payments, the same cannot be said of everyone

But, while the virus and our own personal preferences may be behind much of the move to digital, we are also being nudged in this direction. Banks are influencing our behaviour by making it more expensive to transact in cash. AIB, for example, has a charge of €0.35 on each ATM transaction; but contactless is still free, at least for now, and a debit card payment attracts a charge of €0.20. At Revolut, once you take out €400 a month you’ll pay 2 per cent on each subsequent transaction. Not only that, but both AIB and Bank of Ireland recently sold off significant chunks of their ATM businesses last year. And the new owners are likely to look for a return on their money by hiking fees.

But is there a risk we could be giving up more than we bargained for when we tap and go?

For some people, the big threat of a cashless society is the loss of privacy. Our every purchase and gift will be accounted for and tracked.

But the biggest danger perhaps is excluding those who won’t find a place in this digital world. Or at least not yet.

While many of us have embraced everything from Fitbit pay to contactless payments, the same cannot be said of everyone. Yes, Ireland has a high level of financial inclusion, with a high proportion of the population having a bank account. A report from the World Bank in 2017 found that 95 per cent of adults over the age of 15 had one. But 5 per cent of the population that year came to some 239,200 adults; not only that, but many of those with bank accounts may still not have access to digital payments.

It’s one thing denying people without bank accounts access to overpriced picture frames and scarves, but what about meatballs and bookshelves? Moreover, these trends tend to have a ripple effect, and those without bank cards could find themselves increasingly excluded from shops and services.

Which brings us on to whether or not it’s even legal for a shop to decline your money if it is legal tender.

The European Commission’s view is that it is not. It issued a recommendation in 2010 that there should be “mandatory acceptance” of euro notes and coins in the euro area. While it accepts that cash can be refused, for example, where a retailer does not have enough change to give back, it argues that “the refusal of cash payments cannot be permanent”. Doing so – such as putting a sign in a window saying you don’t accept cash – would be contrary “to the very concept of legal tender”.

Provided cashless businesses tell their customers they are cashless, by 'displaying payment information clearly', then it’s not an issue

Does this mean that all those outlets who have gone cashless in Ireland must bring back their tills?

Not so fast. The Central Bank of Ireland, which is responsible for making sure there is an efficient and effective payment and settlement system in Ireland, says the commission’s view on cash is just a recommendation and “not legally binding and did not give rise to legislative changes at national or EU level”.

Rather, it’s a matter of contract law in Ireland. Its view is that as long as a retailer, for example, specifies in advance of a transaction that it will only accept payment by a means other than cash, then “it is not legally obliged to accept settlement of the payment obligation in cash”.

So the signs can go back in the window then.

The regulator clearly doesn’t have an issue with it but what about the entity designed to protect the interests of consumers?

I asked the Competition and Consumer Protection Commission its view. And like the Central Bank, it says that provided cashless businesses tell their customers they are cashless, by “displaying payment information clearly”, then it’s not an issue.

So who’s going to protect those who need access to cash? If Ireland is on the fence, other countries are worried about excluding the vulnerable and have taken a proactive stance on a cashless society.

In the UK, a public accounts committee warned of the risks of a cashless society in December, arguing that regulators weren’t doing enough to protect vulnerable groups who need access to cash.

But it is the US that is leading the charge. Last January, New York followed Massachusetts, which banned digital-only payments in 1978, as well as New Jersey, Philadelphia and San Francisco in banning cashless outlets.

Normally, when it comes to societal issues we might aspire to be more Berlin than Boston. This time around, however, we could perhaps stand to learn from our friends across the Atlantic.