Data shows one of the biggest leaps since 2006 for Irish households; but overall burden still less than Denmark and UK 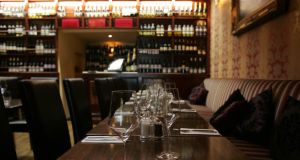 A taste for the good life? New figures show that Irish households spend more in restaurants and cafes than their counterparts across the European Union. Photograph: Aidan Crawley

Housing and utility costs in Ireland are rising at one of the fastest rates across the European Union, according to new figures published on Tuesday, which also show that we spend more on alcohol - but less on clothes - than other European households.

The figures show that households spent over € 2 400 billion, equivalent to 16.4 per cent of EU GDP, on these costs in 2016, “ by far the most significant expenditure of EU households.” Eurostat said.

What do we spend our money on?

However, we are still above average spenders in many other areas. On alcohol and tobacco for example, we spend 5.6 per cent of our household income, compared to an average of 3.9 per cent, and a low of 3.9 per cent in Portugal - and a high of 8.5 per cent in Luxembourg. However the study isn’t explicit on whether this is because we consume more - or because our alcohol prices are higher.

We also spend more on restaurants - again it’s unclear whether we eat out more, or is it because of the cost - at 13.2 per cent compared to an EU average of 6.9 per cent. Spain is the only country where households spend more than Ireland on eating out, at 14.8 per cent; in Poland on the other hand, just 2.5 per cent is spent on restaurants.

And given that our broadband costs have just been shown to be among the most expensive in Europe, it may be no surprise to learn that we spend more on communications (2.6%) compared to the EU average (2.5%).

1 Suspicions rife as key Brexit trade talks begin in Brussels
2 Corona beer firm reeling after 8% slide due to coronavirus
3 Life as a Facebook moderator: ‘People are awful. This is what my job has taught me’
4 Irish companies restrict travel over coronavirus fears
5 We have little chance of building enough homes to meet election promises
6 ‘The only time apartments were viable was in . . . Ballsbridge, Killiney and Dalkey’
7 How well paid do you think you are? Here’s how to work it out
8 Why Irish banks are now looking beyond vulture funds on problem loans
9 Pharma giant AbbVie warned Government against ‘unfair’ €572m tax bill
10 Coronavirus: Iseq down 11% in five days as global sell-off is worst week since 2008 crisis
Real news has value SUBSCRIBE
Save money on international transfers