Have the Irish given up on owning their own homes? 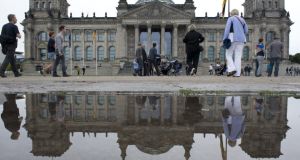 Berlin, where just about 14 per cent own their own homes compared to about 60 per cent in Dublin. Photograph: John MacDougall/AFP/GettyImages

We may look to Boston when it comes to business, but when it comes to home ownership, it’s another story. While we might not be looking to emulate Berlin yet, we have definitely become more akin to a small German state. An analysis of home ownership trends shows that the Irish are becoming ever more European, as the number of people buying rather than renting a home has fallen to a near 50-year low.

According to unpublished figures from the Central Statistics Office, which it compiles as part of its Quarterly National Household Survey, Irish society has changed significantly in the past 16 years. People are turning away from the dream of owning their own homes in favour of the flexibility – and uncertainty – of the increasingly tough rental market.

But why have the Irish scaled back their dreams of owning their own plot of land? Should we care about this? And what is the future likely to hold?

Irish people’s living arrangements have become decidedly European in recent years. Home ownership reached a peak at about 80.1 per cent in 1991, one of the highest rates of home ownership in western Europe at the time, with just 8 per cent of households renting privately in that year.

However, soaring property prices in the boom years, a sharp rise in the demand for rented accommodation on the back of tax breaks and an influx of investors into urban regeneration projects means that ownership figures have been on a downward trajectory since. And the years of dicing with economic collapse followed by a slow recovery have done nothing to reverse the trend.

Back in 2000, for example, four out of every five people in Ireland lived in a home they owned, with just 7 per cent of the population renting privately, and the remainder largely renting from a local authority.

Fast forward to the epoch of the crash, 2008, and a sharp increase in property prices meant that the figure had fallen to just three in every four people living in a home they owned. By 2015, this had slumped to 71 per cent, and to 69.7 per cent by the end of 2016.

The last time we saw figure this low was in the late 1960s, a time when studies show that State incentives meant that almost a third of the cost of a standard suburban house could be recouped from grants, helping to boost home ownership levels in the subsequent years.

Given such a downward trend, it’s possible that within a few years, as few as two-thirds of the Irish population could live in a home they own – a stark contrast to the years when home ownership was a legitimate goal for most Irish people.

With an extra 573,000 people looking to rent, it’s little wonder we are in the midst of a rental crisis.

For John McCartney, an economist with Savills, some of the demand for housing was funnelled from home ownership into rent. This is especially so as immigration into Ireland increased. Migrants typically opted to rent, rather than buy, a home.

But Ireland is not alone in seeing home ownership rates decline. It’s a trend that is happening elsewhere. Last year home ownership in the US fell to the lowest in more than 50 years, down to 63 per cent, while home ownership in Britain is at a 30-year low of 64 per cent, the lowest figure seen since 1986. PwC suggests that the rate is expected to drop to less than 60 by per cent by 2025 in Northern Ireland.

The question is whether or not people are choosing to stay in rented accommodation or whether a combination of uncertain jobs and rising house prices is keeping them out of the housing market.

A number of factors appear to have combined to make it more difficult to secure home ownership.

Younger buyers constrained by insecure jobs, inadequate savings and mortgage rules are taking longer to get on the ladder. The average age of today’s first-time buyer is 34 – a big advance on the typical age of 29 a decade ago.

Access to credit and mortgage-lending rules, introduced in 2015, have also been a factor.

“Mortgage lending restrictions weren’t binding in other parts of the country but they were binding in Dublin, so it was harder to buy houses in Dublin,” notes McCartney.

Also, more people are single today than in previous generations, which in itself makes it more difficult to get on the housing ladder. For example, the number of “small” household units of one to two persons rose significantly between 2009 and 2013, and most of this increase was noted in Dublin.

Given that owning your own home is cheaper than renting in many parts of the State, even in Dublin, one might expect the slide not to be so significant.

Affordability, for example, has remained stable in recent years; the EBS DKM affordability index shows that a working couple now needs to spend 21 per cent of their after-tax income on mortgage repayments, down from 32 per cent in 2007.

Moreover, a survey from Daft.ie last year found that, in the capital, owning a one- or two-bedroom property was cheaper than renting, as is a three-bedroom home in west Dublin. So one possible conclusion could be that people are finding it difficult to get the funds together for a deposit on a home, rather than the wherewithal to pay the mortgage itself.

Of course it could also be a case that people have fallen out of love with the ideals of home ownership. Younger people may prefer the flexibility that renting offers; their older counterparts may have been burned by negative equity and arrears in the fall-out of the boom years.

The question then, if home ownership rates are slipping, should we, as a society, as an economy, care? The main economic argument for home ownership is that, in the words of Thomas Shapiro of Brandeis University, “it is by far the single most important way families accumulate wealth”.

This is particularly true in Ireland. As McCartney notes, Irish people have a relatively low savings ratio because the mortgage has proven a de facto method of accumulating wealth over time.

This approach sees someone buy a house in their 20s or 30s, paying off their mortgage and retiring at the age of 60 to 65, then living rent free for the rest of their lives on a pretty modest pension.

“It’s pretty deeply embedded and is a pretty good workable system,” he says. “But this gets disrupted if you’re going to be renting for a longer portion of your life. How will you pay for accommodation costs when you retire?”

Those of us dependent on defined-contribution pensions to fund our retirement will struggle to live on these as it is, given current inadequate funding levels. If we have to pay rent as well, many of us could be looking at poverty in our senescence.

“We’re not really set up for long-term renting; there would need to be some pretty fundamental cultural shifts in terms of how ordinary households plan their finances through their life cycle before it could become a mainstream possibility,” says McCartney.

In countries such as Germany, rental markets are subject to much greater regulations which can help protect pensioners.

On the other side, given experiences post-boom, it could be argued that home ownership is only really beneficial when it is able to withstand shocks.

It could be that, to pardon the pun, a floor has been reached in falling home ownership figures. Mortgage approvals have jumped in the wake of the Governments’ Help to Buy scheme and looser lending rules, increasing by 41 per cent in the three months to the end of January, as first-time buyers flocked to get loans.

“There is a distinct possibility that the size of rental market has peaked,” says McCartney. If this is the case, we could expect to see the overall trajectory of home ownership trends reverse once more.