Computers increasingly dominate today’s investment world, but they can only go so far 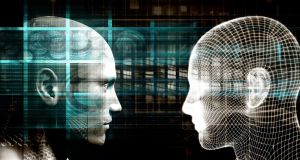 Man or machine? Efficient, unemotional and without any of the cognitive biases that bedevil human judgement, computers increasingly dominate today’s investment world, but they cannot yet match the “very best investors”.

That’s according to billionaire fund manager Howard Marks, who made the case for the human touch last month in a 17-page memo, “Investing Without People”.

A celebrated investor who famously warned of trouble in advance of the global financial crash more than a decade ago, Marks is taken seriously in financial circles, but many disagree and argue humans are likely to play an increasingly marginal role in investment matters over time.

Last year, former Google chairman Eric Schmidt told a hedge fund conference that people “won’t be doing trading by themselves” in the future. Rather, there will be two types of trading, said Schmidt. “One would be [where] the human asks the computer, ‘here’s a very interesting scenario, score it for me and if it’s above a certain score, we’ll buy it’. Then the alternative fight will be for a non-human assisted trading, where there’s no human asking the question.”

The greatest investors aren’t necessarily better than others at arithmetic, accounting or finance', but they do have 'creativity, taste, discernment and judgment'

Conventional stock-picking is already very much a minority pursuit, with JP Morgan last year estimating that only around 10 per cent of US equity trading trading is done by traditional “discretionary” traders. A separate Credit Suisse survey found almost 60 per cent of investors planned on upping their exposure to quantitative strategies over the next three to five years. Only 4 per cent said they would reduce their exposure, Credit Suisse noted.

There are good reasons for this shift, admits Marks. Quantitative investing “can do much of what people do, generally without making ‘human mistakes’”; it can handle “infinitely more data”; it “never forgets to rebalance”, selling when assets get expensive and buying when they are cheap; and it is completely unemotional, never buying on euphoria or selling in panic.

Computers can’t sit down with a chief executive and figure out if he’s the next Steve Jobs, says Marks, or listen to venture capital pitches and know which is the next Amazon. “The greatest investors aren’t necessarily better than others at arithmetic, accounting or finance”, he says, but they do have “creativity, taste, discernment and judgment”.

Secondly, rule-based quantitative strategies tend to be based on data showing what worked in the past, but those patterns may change for any number of reasons. Quants often target stocks with characteristics or “factors” associated with outperformance, such as value, momentum, and low volatility, but there can never be a magic formula, says Marks. Patterns typically cease to work when they become too popular, so even an “exceptional formula” is likely to only work for a “limited time”.

Investing is dynamic, so rules-based investing must be similarly dynamic. The best models will require “constant renewal”, changing exposures as the market environment changes. Artificial intelligence – the ability of computers to think and constantly tweak investing rules without human intervention – may very well aid this process, but machine learning “is still in its infancy”, he adds.

Still, similar criticisms could be made of active managers who prefer a discretionary approach. While Marks is right to note that there can be no magic formula, that markets change resulting in old strategies ceasing to work, this is also a problem for conventional stock pickers. After all, most if not all investors base their strategies on approaches that worked in the past.

Investors like Marks, Jeremy Grantham and David Einhorn built their stellar reputations by steering clear of expensive assets and overweighting cheap assets, but this age-old value strategy just hasn’t worked over the last decade. The increased competition and sophistication of financial markets mean it’s more difficult than ever to outperform; even Warren Buffett has failed to beat the S&P 500 over the last decade.

In contrast, George Soros once admitted his own early research efforts were heartbreakingly “amateurish”, but that he still had major investment institutions “eating out of my hands because they needed the information”.

Similarly, while it may well be true that the very best fund managers have “creativity, taste, discernment and judgement”, it can be very hard to distinguish such investors from less skilled practitioners who owe their success to luck rather than skill.

Nor is there any hard evidence that skilled investors can identify the next Steve Jobs or the next Amazon. In fact, a meta-analysis of 136 published studies comparing the accuracy of simple mechanical models to expert human judgment found that the models either beat or equalled the experts 94 per cent of the time.

Of course, there are undeniably times that computers badly malfunction, resulting in market distortions that can be corrected by watchful fund managers.

During the infamous 2010 flash crash, some of the most valuable stocks in the world briefly traded for pennies. In August 2015, a more minor flash crash also resulted in wild price swings. Some exchange-traded funds (ETFs) lost more than a quarter of their value and major stocks like Apple, Starbucks and JP Morgan plunged for no good reason before quickly reclaiming their losses.

At times like that, computers are truly “the new dumb money”, as money manager and Reformed Broker blogger Josh Brown put it at the time.

Still, such occasions are a relative rarity. Most of the time, computers are quick to profit from market mispricing, which is why major hedge funds are increasingly looking to hire top mathematicians and computer scientists rather than conventional finance graduates. Ray Dalio’s Bridgewater Associates, the world’s biggest hedge fund, is going further; it hopes to automate the day-to-day management of the firm, replacing managers with machines.

The trend towards computer-driven investing can only go so far, says Howard Marks, who expects that “humans with superior insight” will continue to outperform markets in the coming years and decades. Still, ordinary investors should note that Marks is talking about especially skilled fund managers; the cream of the crop, so to speak. “Computers can do more than the vast majority of investors”, he admits, “and do it better”.