Ethical investors: Do they want to do good or just feel good? 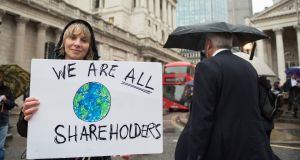 Do socially responsible investors want to make the world a better place? Or do they just want to feel better about themselves? The latter interpretation might seem cynical but a recent study suggests it may contain more than a grain of truth. Our capacity for morality is limited, according to Ann-Christine Brunen from the University of Cologne, and apparently virtuous actions in one area are often motivated by a desire to justify more selfish choices in another.

In her paper, Moral Licensing and Socially Responsible Investment Decisions, she documents the spending habits of 287 fund investors in Germany, comparing the purchases that appear in their bank accounts with the stocks in their portfolios.

One might assume investors who buy ethical funds make similarly socially-aware purchases in their daily life but that’s not the case, says Brunen. In fact, an investor who does half their shopping at organic supermarkets is up to 14 percentage points less likely than someone who shops at mainstream supermarkets to select an SRI (socially responsible investment) equity fund.

Similarly, investors who donate money to charities and who support small local bookstores are also less likely to buy an SRI fund.

Other studies have found socially responsible consumers are more likely to declare an intention to invest in SRI but “intentions and actions are completely different things”, says Brunen.

More likely, says Brunen, is that this is a case of what psychologists call moral licensing, whereby people use their prior “good” behaviour to justify later “bad” behaviour.

Another study, Sinning Saints and Saintly Sinners, asked participants to write a story about themselves in either a positive or negative way; those who wrote about their positive traits subsequently donated one fifth as much money to charity as those who described themselves negatively. Studies have found people are more likely to donate less money to charity after expressing a decision to help a foreign student; more likely to donate after making an immoral decision; and more likely to choose indulgent products after making a previous virtuous choice.

Other studies confirm that such behaviour extends into the investment arena. One of the first such studies, the widely-cited 1999 paper Morals and Markets: The Case of Ethical Investing, found ethical investors had concerns about various issues but were not prepared to sacrifice financial returns. To get around this dilemma, they “decided that it was enough to only be a partial ethical investor”, opting for a core-satellite strategy where a small amount of money was invested in ethical funds to “assuage their consciences” while the rest was left in non-ethical funds.

Moral licensing is also a feature in the venture capital world, impacting female-funded tech startups. Increased focus on the gender funding gap has helped female startup founders win more high-visibility pitch competitions in recent years, according to Prof Mark Conley from the Stockholm School of Economics. However, these same female entrepreneurs raise less funding than men by a huge margin.

Financial advisers, too, are guilty of moral licensing.

Advisers often face a conflict of interest. They may be tempted to try and sell a client an inferior and more expensive fund if they receive a commission from that particular fund company. One potential remedy is forcing advisers to declare to the client any potential conflicts of interest.

However, studies have found this can backfire; disclosures can make advisers more likely to issue biased advice. Why? “After a conflict of interest has been disclosed”, says George Loewenstein, “advisers may feel that advisees have been warned and that advisors are ‘morally licensed’ to provide biased advice”.

Overall, the research indicates that most of us want to think well of ourselves while simultaneously doing well for ourselves.

“When being dishonest is financially beneficial,” says Christine Brunen, “people behave dishonestly exactly to the extent that it is beneficial for them but allows to maintain their positive self-image.”

Most people seek “moral balance”; thus, to “maintain a clear conscience”, they compensate conventional investments with an SRI fund or with “responsible” consumption. The most morally consistent appproach is to be equally conscious in both your shopping and investing habits, but that’s a bridge too far for most people.

Moral licensing has implications for both the investment industry and wider society. For funds, “offering SRIs as compensation for irresponsible consumption choices, as it is already practiced to some degree, is a sound marketing strategy”, says Brunen.

As for society, the EU has estimated that to achieve the 2030 climate targets set out in the 2015 Paris agreement, it will have to fill an estimated investment gap of €180 billion a year. In order to direct more private money towards sustainable investments, the EU’s action plan on sustainable finance schedules investment firms to include ESG criteria into financial advice they give to clients.Understanding SRI investors can help to market ethical funds more efficiently, says Brunen, thus increasing the retail investor base that is a necessary source of sustainable capital.