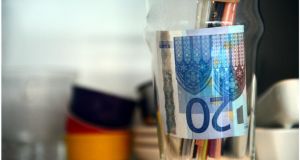 Moneylenders typically charge very high interest rates which can make it difficult for people to repay and encourage a cycle of borrowing. (Photograph: Bryan O’Brien / THE IRISH TIMES)

The Central Bank is urging consumers to “think twice” before taking out additional loans from moneylending firms this Christmas.

“Households often have additional expenses at this time of year, and consumers could be tempted to take out additional loans to cover these expenses, including from moneylending firms,” said Bernard Sheridan, director of consumer protection with the Central Bank, warning that “this could take consumers into a rolling cycle of high-cost borrowing and potential debt, especially given the high-cost nature of moneylender loans, when compared with loans from banks and credit unions.”

Last year, research from the Central Bank showed that one in five consumers (21%) took out a new loan before another loan was paid off. Of these, 27 per cent claimed that they had used their new loan to reduce an existing loan, even though this is prohibited.

Moneylenders typically apply little credit checks when lending money and are legally entitled to charge interest of in excess of 200 per cent in Ireland, although the Central Bank does impose a limit. Provident Personal Credit for example, can charge a rate of up to 187.2 per cent. This means that a €500 loan over 26 weeks will cost €650 to repay.

He also urged consumers to remember that if they run into difficulties repaying a loan, moneylenders cannot charge you extra.

“However, if you find yourself having difficulties managing your money, contact the Money Advice and Budgeting Service who offer free budgeting advice and will help you manage your debt,” he said.

You can check if a moneylender is authorised by the Central Bank by checking its registers here.

On Monday Provident was fined €105,000 by the Central Bank for breaches of the legislation relating to certain moneylending practices.

Following an investigation, the bank found, that in relation to 117 loans provided out of the moneylender’s Letterkenny office between 2009 and 2012, the firm failed to advance the full amount of the loan to those consumers that they had entered into agreements with. The bank said some of the new loans were deducted and used to repay outstanding amounts on loans which had previously been provided to consumers.