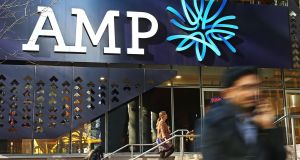 AMP: the company repeatedly lied to the Australian regulator and interfered in the drafting of an independent report. Photograph: Scott Barbour/Getty Images

As Ireland moves towards a mandatory pension scheme to address the large number of workers who face retirement on nothing but the State pension, the Government would do well to look at Australia for examples of what does and does not work.

A compulsory pension scheme known as superannuation (commonly known as the “super”) was introduced by a Labor government under prime minister Paul Keating in 1992, with the aim of relieving pressure on Australia’s state pension caused by an ageing population.

Contributions rose gradually over more than 20 years to 9.5 per cent of employee earnings by 2014, and the assets invested are now worth more than 2.6 trillion Australian dollars (€1.62 trillion). But that growth has been hampered by conservative governments.

Firstly, in 2002 under prime minister John Howard, overtime earnings were excluded from super calculations. Then, when Tony Abbott won power from Labor in 2013, his government delayed the start of further increases in contributions by six years. The compulsory guarantee will not increase again until 2021, when it will rise to 10 per cent, then rising a half per cent each year until it reaches 12 per cent in 2025.

Since July 2005,employees have been able to choose which fund their contributions are paid into – out of about 500 in operation. Before that, the money had been paid into a default option set by the employer but, with people changing jobs, this had led to many people having multiple funds and paying multiple fees if they have not consolidated their contributions into one account.

Australia’s productivity commission estimates the fees and premiums in these accounts “erode member balances by $2.6 billion [Australian dollars] a year”.

But consolidating does not always benefit the saver either.

A third of all super accounts are managed by what are known as retail funds run by financial institutions. But the ongoing banking royal commission (equivalent to a tribunal in Ireland) has highlighted some astronomical charges and other anomalies in retail funds.

Two weeks ago, financial services company AMP admitted a customer had lost money after investing $100,000 cash in a super account due to its high fees and charges.

Another customer lost 25 per cent of his balance after being advised by AMP to consolidate his various superannuation benefits into a single AMP-owned fund.

Another fund manager was revealed to have continued to charge “super” commissions to people even after they had died.

It was not AMP’s first turn in the spotlight. In April, after it was revealed the company repeatedly lied to the Australian regulator, the Securities and Investments Commission, and interfered in the drafting of an independent report, its chief executive Craig Meller resigned with immediate effect. Chairwoman Catherine Brenner soon followed him out the door and AMP’s market capitalisation price fell by more than $1 billion.

Seeking to salvage its reputation, AMP announced it would pay $5 million to compensate almost 50,000 superannuation fund members short-changed by their investments.

Just over 15 per cent of people have their super savings in what are known as industry funds, run by employer associations and/or unions. Unlike retail funds, they are run solely for the benefit of members, as there are no shareholders.

In the five years to 2016-17, retail funds averaged a return each year of 8.1 per cent, compared with the average of 10.2 per cent for industry funds. On an annual basis, in every year bar one of the past 14, industry funds have on average outperformed retail funds.

Paul Keating has long claimed his legacy as the founding father of superannuation in Australia, but warned in a speech of the challenges involved in getting the mandatory system to a minimum level of 12 per cent of wages.

“As with all things, something on this scale requires imagination. It also requires conscientiousness and for leaders and ministers to take responsibility … But the years are ticking by and, with each one we lose, the compounding effect on the savings and the wider opportunity to set the nation up for the future.”

The years are ticking by in Ireland, too.

1 ‘I don’t need to do any of this. . .I don’t actually need to work.’
2 Basic income for all: Has the Covid crisis given us a new economic model?
3 Promontoria barred from pursuing doctor over Ulster Bank loan
4 Only way is up for Stripe as valuation skyrockets
5 Irish designer of Oxford vaccine: ‘I’ve never worked so hard in my life’
6 Anti-alcohol zeal of public health experts peppers reopening debate
7 Direct sea routes to Europe offer certainty in choppy Brexit waters
8 Unilever’s Dutch and British arms merge after 90 years ahead of Brexit
9 Online shoppers face unwelcome tax surprise
10 How long can Government afford to keep State pension age at 66?
Real news has value SUBSCRIBE
Save money on international transfers